Talking Across the Stars 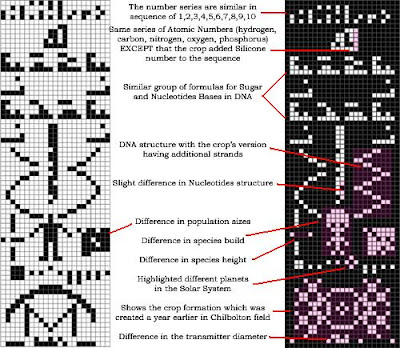 On November 16, 1974, a radio message (the image on the left) consisting of 1679 pulses of binary code (0's and 1's), taking a little under three minutes to transmit, was transmitted on a frequency of 2380MHz from the Arecibo Radio Observatory in Puerto Rico by SETI (the Search for Extra-Terrestrial Intelligence) to the globular star cluster M13, some 25,000 light years away and consisting of some 300,000 stars in the constellation of Hercules, in an attempt to solicit a response from any intelligent alien lifeforms that might receive the message. The message was a mathematical explanation written in a basic code describing who we are as a species and where we live within our own solar system.

Why 1679 digits? The reason for this is pure mathematics. 1679 is the unique product of two prime numbers - 23 and 73. Any sufficiently intelligent lifeform would look for unique, universal constructs - such as prime numbers, chemical element frequencies and binary digits. Because ONLY the two prime numbers 23 and 73, when multiplied together, produce 1679 there can only be a single way to arrange the signal, by converting it into a matrix grid - 23 squares by 73 squares.

The numbers 1 to 10 appear exactly the same in the formation. However the atomic numbers indicating the prevalent elements making up life on Earth, has an additional value inserted into the binary sequence. This is precisely added in the correct location in the original binary code (therefore it can't be a mistake). Decoding from the crop formation, this additional element has an atomic number of 14 - Silicon. Moving down, the next change is an obvious one - consisting of an extra strand on the right side of the DNA double-helix. Another, less obvious, change is in the binary coding of the number of nucleotides in DNA itself (in the center). There are quite significant changes to the shape of the alien-like humanoid form and to the diagram of the Arecibo dish. On either side of the ET form, there are changes to both the population figure and also the height value. The latter is now 1000 in binary, or 8. If we multiply this by the original wavelength unit we get 100.8cm which is roughly 3' 4" - corresponding to the height of ET by many witness accounts. Below this there are additional changes to the Solar System chart. The third planet from the sun is not the only one highlighted; the fourth and fifth planets are as well. The fifth even appears to be emphasized even more, with three additional pixels. Lastly, the representation of the Arecibo transmitter in the original message is even more cryptic, and the binary code for the size of the transmitter is altered.

So what does it all mean? There are some fairly obvious implications from the crop formation. First, and quite obvious from the aerial view is the shape of the ET figure. It clearly has a stick-like body with two arms and two legs, but has a much larger head and two distinct eyes, reminiscent of the greys of popular UFO culture. Indeed, the modified height code of just over three feet would also confirm this. If you decode the population binary sequence in the actual crop formation you get a value of approx 21.3 billion - a lot bigger than the original transmission and Earth's current population. Perhaps this is the population of ET's planet, or even the combined human and ET population of Earth - if you believe, like some researchers, that Earth is already populated by an unseen ET contingency! If you assume that the alterations to the Solar System section in the crop formation refer to several planets, then this could also indicate the combined population of inhabited planets somewhere. There is also some indication of a change in the basic DNA structure of ET. The additional (third) strand shown on the right and also a change in the number of nucleotides indicates a different DNA than ours. It seems quite similar, so perhaps it's a genetic alteration or even a mutation of ours. The difference in the Solar System information could indicate one of two scenarios: either it refers to our own Solar System, but in addition to highlighting Earth it also highlights the fourth and fifth planets - Mars and Jupiter. Alternatively, it might not correspond to our own Solar System at all, but to the ET's own solar system - which would also appear to consist of nine planets. The sun is also depicted in the crop formation as slightly smaller. Could this be their smaller sun, or could it represent some point in our own future - perhaps when the sun has become smaller and we've populated the other planets? This latter idea, although highly speculative, could even indicate the DNA modification through increased genetic experiments.

If you look at the whole exchange on a philosophical level, it stimulates an intriguing debate about communication with other possible lifeforms. And it begs the question as to whether crop circles are a legitimate form of interstellar communication. And since the Chilbolten crop circle has an additional column added for Silicon, could this be an additional clue about the physiology of ET's? Perhaps ET is a silicon based lifeform instead of carbon based. Regardless of our take on the exchange, the formations at Chilbolten represent an immense effort to portray what we see in the field and from the air. To create the Chilbolten crop formation within a few hours of darkness over one night would have been extremely impressive, irrespective of its origin - whether human or extra-terrestrial. 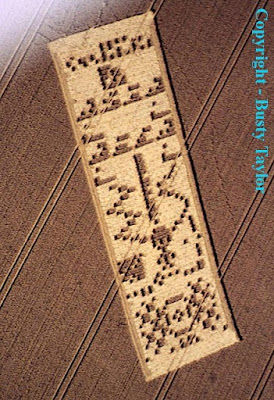 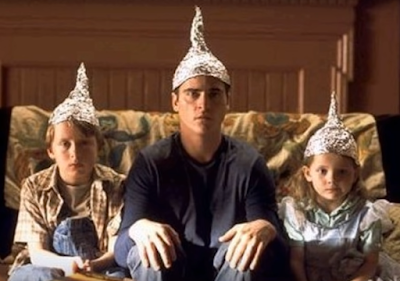