The Spirituality of Mathematics 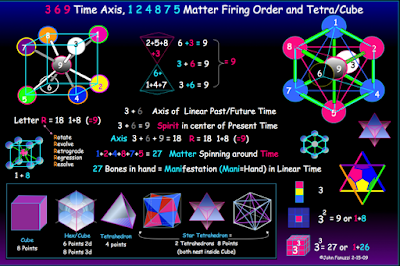 Philosophy [nature] is written in that great book which ever is before our eyes - I mean the universe - but we cannot understand it if we do not first learn the language and grasp the symbols in which it is written. The book is written in mathematical language, and the symbols are triangles, circles and other geometrical figures, without whose help it is impossible to comprehend a single word of it; without which one wanders
in vain through a dark labyrinth.
Galileo Galilei

If you only knew the magnificence of the 3, 6, and 9,
then you would have a key to the universe.
Nikola Tesla

Tesla was fascinated with the numbers 3, 6 and 9, perhaps even obsessed, as he was reported to have always walked around a building three times before entering. Aside from his apparent obsession, there is substance to his fascination. The 3, 6 and 9 represent the pathways that force (energy / information) manifest through to form material. The other numbers: 1 , 2 , 4 , 5 , 7 , 8 represent the already manifested ingredients of material. Thus the structure of all things material is dependent on the sequence / pattern that force takes via the 3 , 6 and 9 conduits. The sequence changes to form the pulses (wave) force found forming and supporting all things commonly known as fields.

9 is 3 squared and 3 is the first prime. Everything contained herein expresses the 3 or third principal. Space is defined by 3 dimensions. When working with these number patterns, think in terms of thirds. Now it becomes somewhat clearer as to why there are 360 degrees in a circle. They are all expressing decimal parity of 9 which is to say they are center focused. Even if you halve 45 and so on you will get 22.5 = 9, 11.25 = 9, 5.625 = 9, 2.8125 = 9 and so on. The 9 is a self similar axis, the Z axis. The X and Y define the surface topology of the logarithmic spiral, while Z is the central third. 6 and 3 oscillate around nine and it’s probably 360 because 3 and 6 are the “nines”.

Numbers have temporal value (series of values over a time period), spatial (occupying) and volumetric qualities. Space and time are one thing - “space-time”. They are both spirals. Everything is a curved line except the 9 - the spirit emanation outside of space and time.

Not only that but an atom is 99.9999 % space; it is a mini blackhole. Electromagnetism is radiating out from an exchange of gravity going into the 9. The 9 demonstrates the omni dimension which is the higher dimensional flux emanation called Spirit that always occurs within the center of a magnetic field. The number nine is Energy being manifested in a single moment event of occurrence in our physical world of creation. It is unique because it is the focal center by being the only number identifying with the vertical upright axis. It is the singularity or the Primal Point of Unity. The number nine never changes and is linear.

Nature always expresses herself with numbers. The symmetry of our decimal system is a principle of nature. The 9 axis causes the doubling circuit and it is the point towards which matter converges and away from which it diverges or expands. Thus the polar number pairs will be mirror images of each other, both flowing in opposite directions from the central axis. There is perfect symmetry wrapped around a single point coiling outwards the way that petals are wrapped in a rose, or a nautilus shell spirals outward.

The number nine lines up with the center of the infinity symbol and it is from this center that the linear emanations we call Spirit flow from the center of mass outwards. Spirit is the only thing in the universe that moves in a straight line. Spirit is what makes everything else warp and curve around it. The perfect number patterns are actually created by this Spirit energy. Without Spirit the universe would become destitute and void. Spirit flow is the source of all movement as well as the source of the non-decaying spin of the electron.
at February 25, 2017