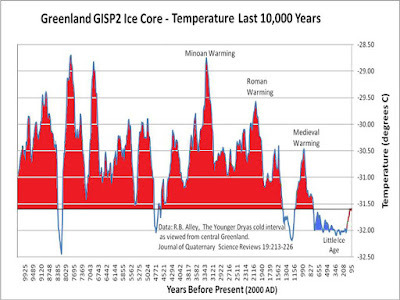 Global Warming's Chicken Little has cried "the Sky is Falling" much too often for most to take its frantic warnings very seriously anymore. Whether the public no longer gives the claim much credibility or merely has become bored with the obvious much ado about nothing whining of the media, enthusiasm for the climate change argument is finally on the wane. While the country has largely become complacent about the issue with the change of administrations and shifted focus toward restoring the economy, the progressives have not abandoned their dream of controlling the world's energy industry based on the greatest scientific hoax ever perpetrated.

Environmental zealots believe that it has been proven that CO2 is the primary controlling factor for climate change, which is in fact not true at all. While carbon dioxide is certainly a factor impacting the climate cycle, further careful review and analysis of climate data must be the basis of debate, detached from any political agenda. Carbon dioxide is a vital life-giving molecule that is in large part responsible for our success as a species on this planet, but is without question also a heat-trapping greenhouse gas. It is, however, far from the primary heat-trapping greenhouse gas. Water vapor accounts for about 95 percent of greenhouse gases. Carbon dioxide is only a trace component in the atmosphere - about 400 parts per million, or 0.04 percent of the atmosphere, and of that only 4% of it comes from human activity. That's 16 parts per million introduced by humans, or 1 part in every 62,500 parts of our atmosphere. Furthermore, CO2's impact on any measurable warming decreases significantly after the first 20 parts per million. Adding more CO2 to the atmosphere, regardless of the source, has a negligible effect. It is like painting over a red wall with white paint — after the first coat most of the red is covered. A second coat of paint has much less of an effect, while adding more coats has nearly no impact whatsoever.

Some argue that carbon dioxide amplifies the creation of water vapor, but climate models based on this consistently show global warming far beyond what is occurring. Most scientists cannot yet make accurate predictions about future climate change because their understanding of climate science remains highly incomplete. Like most speculative arguments, it fails to have any useful predictive value. Scientists still cannot predict local weather much beyond three days with much accuracy, let alone make accurate predictions about climate change hundreds or thousands of years from now.

The science is far from complete. Earth’s climate system is unfathomably complex, affected by countless interacting variables, with carbon dioxide levels in the atmosphere being just one. The list of variables that shape climate includes cloud formation, topography, altitude, proximity to the equator, plate tectonics, sunspot cycles, volcanic activity, expansion or contraction of sea ice, conversion of land to agriculture, deforestation, reforestation, direction of winds, soil quality, El Niño and La Niña ocean cycles, prevalence of aerosols (airborne soot, dust, and salt) — in addition to atmospheric greenhouse gases, both natural and man made. A comprehensive list would run to hundreds, if not thousands, of factors, none of which scientists would claim to understand with absolute certainty.

The more variables there are in any system the more difficult it becomes from a probability standpoint to make reliable predictions. Just supposing there were only 20 variables that influenced the climate and science could claim a 90% accuracy of understanding for each, then multiplying .90 times itself 20 times yields 12% odds that a climate model built on a system that simple would be reliable. In a world where climate variables are exponentially greater it is little wonder that even the most refined climate models fall far short of giving us any sort of reliably exact forecast of future conditions. Measuring the human impact on earth's climate may always fall short of our aim to make useful predictions. To say that the science is settled or to implement political initiatives to reduce carbon emissions at considerable cost to society is irresponsible. Recklessly spouting dire warnings of what might happen, based upon the science we now have, is nothing other than ignorance or political fear-mongering.

The most devious part of the hoax is the fact that warming on planet earth is a good thing. Throughout history, humans, as well as all other living creatures, have thrived during earth's warm periods, and suffered and starved during the cold ones.The Romans rose up when the earth was much warmer than it had been previously, and just as the earth was entering the 400-year-long Little Ice Age, the Roman Empire was overrun by the Huns. The Egyptians built the pyramids when the climate of the earth was much warmer than today. And it is no coincidence that the beginning of the industrial revolution coincided precisely with the conclusion of the Little Ice Age. If global warming is so bad, then why has humankind as well as other animal life and plant life always flourished when the earth goes into a warming period?

Warming and cooling periods are part of a larger natural cycle that has been occurring long before humans lived on the earth. If atmospheric carbon dioxide increases are the primary cause of planetary warming, then why from the 1940's through the mid 1970's was the earth cooling when increases in our use of fossil fuels were at their greatest? 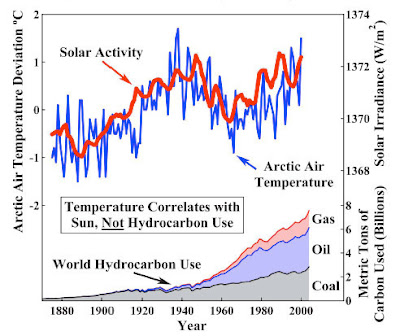 Does anyone even bother to ask why is it that Mars and Jupiter, as well as Neptune's moon Titan, have all followed the exact same warming and cooling cycles as the earth during the 20th century? Does it make sense to suggest that if the entire solar system is warming and cooling in sync, then maybe the greatest contributing factor may be the source of all warmth - our own sun? Do ya think?

There are a lot of bright people out there who have been suckered into this global warming nonsense to the point where they actually believe it. The old adage that if you tell a lie often enough it becomes the truth is in full play here, especially when those with other points of view are shouted down and dubbed as "deniers" by the media and academia. But even though people are slowly growing skeptical about it or losing their enthusiasm for the argument as they abandon the propagandizing mainstream media, we can't afford to let our guard down about this grandiose hoax. Whatever the environmental cry - whether the subject is global warming, or global cooling, or ocean acidification - we need to stay informed and denounce the madness of this outrageous lie and see it for what it really is. The global warming hoax has never been summed up as well as by H. L. Mencken: "The whole aim of practical politics is to keep the populace alarmed (and hence clamorous to be led to safety) by menacing it with an endless series of hobgoblins, all of them imaginary."
at March 16, 2017