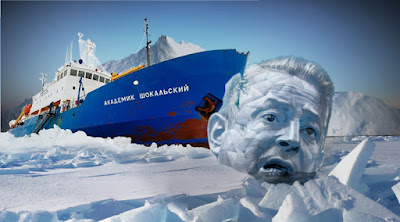 I read the news today, oh boy. A bunch of global warming religionists go on an Antarctic expedition to measure the “melting sea ice” and become trapped in record thick sea ice, while ice cutters from three nations fail to reach the stranded cruise ship because of thick ice they cannot cut through. In the midst of their own peril, this cult of Global Warming enthusiasts still blamed ‘climate change’ for their situation. Reminds me of when Al Gore delivered a lecture in March 2014 during the First Business Forum on Sustainability and Environment on the outskirts of San Jose, Costa Rica, arguing that global warming meant the end of snow and that there would soon be no more snowy areas to hold future Winter Olympic games. Today I read that snow was just recorded in one of the hottest places on Earth in the Sahara Desert near the town of Ain Sefra, Algeria. Oh boy.

Very hard to resist satire, especially when it comes to Al Gore. Also in the headlines today was a report that 485 scientific papers were published in 2017 that undermine the so-called consensus on climate change. Apparently, the dangers of anthropogenic global warming is not nearly as settled among climate scientists as people would like to imagine. The papers are not written by uninformed climate deniers, but by serious scientists who believe that the true nature of scientific inquiry is not to bow to some proposed dogma—especially where significant ideological, political and economic interests are at play—but to see where the facts lead on their own.

Analysis of these papers by Kenneth Richard delineated findings in one or more
substantiated arguments:

”The first position attributes greater weight to the role of natural mechanisms in changes to the climate system than are acknowledged by climate alarmists, while giving correspondingly less importance to the influence of increased CO2 concentrations on climatic changes. Over 100 of these papers, for instance, examine the substantial solar influence on climate and weather, such as temperature variations and precipitation patterns.

“The second position questions the allegedly “unprecedented” nature of modern climate phenomena such as warming, sea levels, glacier and sea ice retreat, and hurricane and drought intensities. Thirteen of the papers suggested that these events fall within the range of natural variability, while 38 found an absence of significant anthropogenic causality in rising sea levels.

“The third position casts doubt upon the efficacy and reliability of computer climate models for projecting future climate states, suggesting that such predictions are “little more than speculation” given the enormous uncertainty and margins of error in a non-linear climate system with nearly infinite variables. Twenty-eight of the articles in question examined climate model unreliability, including factual errors and the influence of biases, while an additional 12 found no net global warming during the 20th/21st century.

“The fourth position questioned the effectiveness of current policies aimed at curbing emissions and pushing renewable energy, finding them both ineffective and even harmful to the environment. This position also offered a more sanguine evaluation of the projected effects of elevated atmospheric CO2 and a warmer climate, questioning doomsday scenarios and proposing net benefits to the biosphere such as a greener planet and enhanced crop yields. In this category, 12 of the papers documented the failures of policies targeting renewable energy and climate, 8 contended that wind power is harming the environment and biosphere, 13 argued that elevated CO2 levels make for a greener planet with higher crop yields, and 5 proposed that warming is beneficial to both humans and wildlife.”

To summarize all of them into one explanation, let's just cut to the chase: