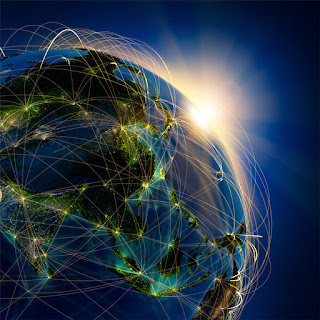 Artificial Intelligence will likely be the most powerful force in the world over the next one hundred years and more. But the thing that is even bigger than AI is the fact that we are beginning to make a global super-organism that will impact us way beyond anything that we might imagine. This is the emerging frontier. AI will be part of it, but not the whole thing. Never in history have we made anything on a planetary basis that works in real time. It is going to be shocking to see what happens when we have a billion people working together on something in real time.

The only other thing like this that happened in my lifetime was Woodstock. I was in high school when this musical “happening” just seemed to come out of nowhere. It was like all of a sudden the same thought occurred to half a million people. People just seemed to all tune into the same message at the same time: “I need to be at this farm.” And they all showed up at Max Yasgur's farm for this wild hippy exposition and concert. I subsequently talked to friends who were there and it seemed as though they were all shocked that so many others also showed up.

I think we can look forward to similar spontaneous gatherings in the future, entirely unanticipated, where suddenly several million people from all different countries and cultures come together and use these new tools of Internet communication to work together in real time to do something collaboratively. Such “happenings” will totally dumbfound people. Everyone will wonder what happened? This will be the beginning of the new frontier, where we see the beginnings of true globalism.

People talk about globalism. We haven’t had globalism yet. But it is coming. And when we have planetary-scale institutions and planetary-scale governance, we will be an entirely new world functioning at a whole different level. Like anything else, there will be planetary problems that require planetary solutions. It will be a whole other order, however, and that’s where we’re headed after AI.

Teilhard de Chardin said: “Someday, after mastering the winds, the waves, the tides, and gravity, we shall harness for God the energies of love. And then, for a second time in the history of the world, man will have discovered fire.” A beautifully poetic image of the future. I think we’re going to be surprised by how deeply emotional the relationships we create with the things that we’re inventing right now - robots and things like that - because emotion will be programmed into them. Not that hard to do. And ethics will be programmed into them as well, which is again not that hard to do, once we decide what kind of ethics is best.

These new relationships are really going to challenge our minds and cultural standards. We’re probably not ready for how much love we might actually have for these new technologies, or maybe how much love they will express back. Imagine having something like a pet dog that could talk to you. At first it will likely be a real challenge. We already know how to program ethics and morality and even emotion into machines, but what we don’t know yet is what it is exactly that we want to program into them.

We like to think that we, as humans, are highly ethical and moral, but in reality for many of us our morality and ethical standards are really shallow, very inconsistent, even horrible. I believe that in the process of trying to program these human attributes into the machines, the process is going to make us better. Just like parenting, we'll figure out where we’re insufficient and adjust to make our machines better, and in the process we’re going to actually become better humans ourselves. A new wild, wild west is emerging. Hold onto your I pads.
at January 26, 2018