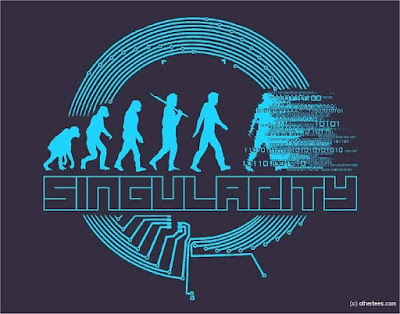 The technological rise of computing during my lifetime has been dizzying. As computing has grown more powerful it has created its own kind of intelligence which we call Artificial Intelligence (AI). We like to think that if we can have machines do most of the work and solve our problems, humanity will advance to a more fulfilling existence. But what happens if the AI reaches a point where it decides that it no longer needs us? Ray Kurzweil in his book The Singularity is Near postulates that AI will very soon become so advanced that it is smarter than we are, begin to accelerate away from us, and take on its own evolution at an exponential rate. The time of that Singularity is imminent, yet we may be rushing to embrace a great unknown without fully understanding some potentially dire ramifications.

There are three kinds of AI, beginning with Artificial Narrow Intelligence which we all experience anytime we go online or use our smart phones. Siri, Cortana, and Alexa are examples of this lowest level of AI. The Narrow Intelligence is beginning to broaden into General Intelligence, where machines are programmed to think like humans. We are not quite there yet, but getting closer quickly. The third level is the scary one: Super Intelligence, where machines become smarter than humans by perhaps billions of times. The difference is that they may have their own agenda. What we don't know is what will happen when machines have this level of intelligence.

We have become dependent upon artificial intelligence whether we like it or not, yet most of us have little appreciation for the power of AI. No one thinks about how this technology is increasingly able to take over decision making for both individuals and humanity collectively. AI poses a potentially serious threat in that it may be able to take over the entire human race, which in turn could potentially lead to the extinction of the human species. AI is here and it is here to stay. It may be, however, a Pandora's box and may have an unexpected surprise for us.

The Singularity could bring dramatic changes in problem solving within economics, science, and industry – providing valuable solutions to major human problems. The huge downside is that along with its utility and efficiency there is going to be an unimaginable loss of jobs – perhaps even up to 90% of the labor force may lose their jobs, which would inevitably lead to anarchy. Almost every job defined by routine could be eliminated with the use of robots and AI. The type of jobs that are very difficult for machines to do are menial jobs like street sweeper and construction. Any jobs where we use our hands and move our feet will be secure, but thinking jobs now performed by humans can readily be replaced with machines.

When we unite human intelligence with machine intelligence we're talking about a miraculous potential for solving human problems, like problems with the environment or problems in medicine; we may see miraculous cures for disease, but at so high a cost to humanity that the cure may be worse than the disease.  If we embrace this remarkable child of our even more remarkable creativity, what will this child become when it no longer needs us?  Are we setting ourselves up for ultimate extinction by enabling a soulless machine to do our work, solve our problem, and make our decisions for us?
at January 15, 2018