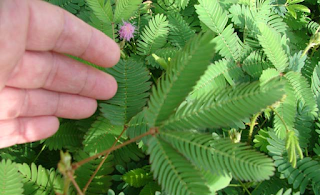 Just how aware are plants? I remember being fascinated with the 1973 bestseller The Secret Life of Plants by Peter Tompkins and Christopher Bird, a book that made some wild claims such as that plants could “read human minds,” “feel stress,” and even “pick” a murderer from a line-up. Always having somewhat of a green thumb and a particular affinity for trees, this tree-hugger's ears perked up upon learning about recent research demonstrating that plants may not only be capable of learning, but of also remembering what they learned for a time.

A professor from Australia was working with a particular Mimosa plant commonly called a “touch-me-not” (as pictured above) because of the plant's predictable behavior of folding its leaves inward whenever it is disturbed. In theory, a touch-me-not will defend itself against any attack, indiscriminately perceiving any touch or drop as an offense and closing itself up.

The test was conducted with 56 touch-me-not plants in which the professor would drop each plant a certain distance from a measured height on a sliding steel rail that guided the plants to a point six inches above a cushioned surface before letting them fall the rest of the way. The first time the plants were dropped, they responded as expected, folding their leaves. But after several more drops, fewer of them closed. She dropped each of them sixty times, in five-second intervals. Eventually, all of them stopped closing. She continued like this for twenty-eight days, but none of them ever closed up again. It was only when she bothered them differently—such as by grabbing them—that they reverted to their usual defense mechanism.

The fascinating conclusion from the study was that the touch-me-nots had “learned” and then “remembered” that being dropped from such a low height wasn’t actually a danger and that they no longer needed to defend themselves. The results would indicate that brains and neurons are not a necessary requirement for learning. Fascinating! The plants seemed to be learning and remembering for nearly a month without a brain, or at least without any sort of neural mechanism that we recognize.

A test like this sparks my curiosity and all sorts of questions emerge. I wonder, as the test was proceeding, if the plants that were dropped later in the day took as long to stop closing their leaves as those dropped earlier. If such is the case, then it seems possible that the touch-me-nots first dropped somehow shared their learning with the other plants, which would mean they either have the ability to communicate or they share a common awareness.

Can plants talk to one another?

Do plants have an individual awareness? Or do they share a collective consciousness?

Of course, I can already imagine an answer to both inquiries based upon my own personal experience. I'm just waiting for science to catch up!!!
at October 03, 2019