the Eagle and the Condor 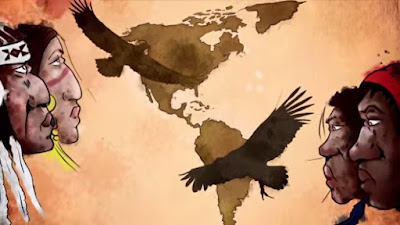 the day will come
when the Eagle and the Condor
will fly together in the same sky, wing to wing,
and the world will come into balance

The prophecy says that in 1492, a 500-year period began during which the Eagle people would become so powerful that they would virtually drive the Condor people out of existence. This can be seen in the conquering of the Americas and the killing and oppressing of the indigenous peoples in the intervening 500 years leading up to today.

In the next 500-year interval—starting around 1990—the prophecy says that the two would have the potential to come together and fly in one sky—dancing together to create a new level of consciousness. The prophecy foretells of the sharing of indigenous knowledge with technologies of science, cultural beliefs and philosophies, and the bridging of indigenous peoples of the Americas. The message it offers about evolving consciousness is that we must now reach for higher levels of awareness; as human beings we are called to awaken and evolve into a more conscious species.

The time is ripe to reexamine the invisible beliefs that have delivered each of our peoples to this point in time. The people of the eagle are often materially rich yet spiritually impoverished. Wealth and possessions have distorted life and diminished the sense of community for the people who build life around the intellect. The people of the condor live simply, within meager means, yet their lives are rich in joyful relationships and wisdom that can only come from a closeness with Nature. Sharing the best of their world of the heart with the Eagle world of abundance and technology will bring about a new era for all to fly higher than ever before.