Getting What You Want in Life 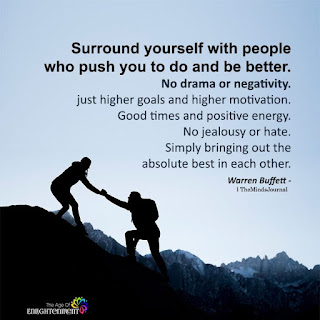 If you want something in your life, no matter what it is, what it is that you want is a better outcome. Look at your memories for evidence of past successes in the area of your desire. If you have to, re-frame those memories to be more successful in them. See yourself as having been a success. Look at other people just like you that have turned the corner and have become successful. Surround yourself with people that you want to be like. If you want to be successful, hang around with successful people. Want to be funnier, hang around with people that make you laugh. Want to be more athletic, spend more time with people who engage in sport. Want to be more spiritual, hang with those who believe the way you want to believe. You cannot help but soak up the environment around you like osmosis. This is how the universe works.

It sounds anecdotal, but there is sound neuroscience behind all of this. Friends interact with friends in their communications in a way that synchronizes their brains. If you are reading this and engaged with the message I write here, if they scanned your brain and they scanned my brain, our brains are going to look alike, at least more than yours and that of some stranger out on the street. Our brains are getting into sync by focusing on the same thing. Take any two people in a room, as soon as they interact, their brains literally begin to pulse in the same way. Part of the brain lights up, while part shuts down. This is how we communicate with one another. This is the one thing that makes us who we are, different than all the other animals. We are able to communicate and get our brains in sync to create a narrative of images that we share in our brains. When you surround yourself with people you want to be like, there is interaction, your brain gets into sync with theirs, and you literally become more like them, and they become more like you.

You don't even need to be in the same room with someone. It works when speaking with someone on the phone or watching someone on an Internet video or a movie. Doing this actually changes your brain. Think of it in a fresh new perspective: Human communication is a mechanism by which information flows between brains. We re-synchronize with the world around us every day - be it good, bad, or ugly. Be sure the brains and the media you surround yourself with and communicate with, both purposefully as well as incidentally, belong to those people you want to be like.
at November 04, 2019