Power to the People of Iran 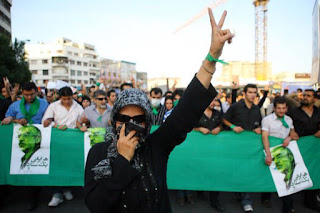 The politics of Iran are somewhat puzzling for most Americans, in most part because we are largely uninformed about who is in charge and what is going on. The Islamic Revolution of 1979 brought to power radical Islamists led by Ayatollah Ruhollah Khomeini, who created a unique and peculiar political system mixing theocratic and republican institutions. It is a complex system of competing institutions, parliamentary factions, powerful families and military-business lobbies.

Today, the system is dominated by hard-line conservative groups backed by the most powerful politician in Iran, the Supreme Leader Ayatollah Ali Khamenei, the son of Ayatollah Ruhollah Khomeini. The conservatives have managed to sideline both the right-wing populists backed by former President Ahmadinejad and reformists calling for a more open political system. Civil society and pro-democracy groups have largely been suppressed.

The Iranian political system is corrupt and rigged in favor of powerful groups that care about money more than ideology and who deliberately perpetuate tensions with the West to distract the public from domestic problems. To date, no political group has been able to challenge Supreme Leader Khamenei. Dissent, freedom of the press and freedom of expression remain highly restricted in the country. Journalists and bloggers are continuously arrested by the Intelligence Unit of the Islamic Revolutionary Guard Corps for "colluding with the foreign media" and sentenced to prison.

In the past week and a half there has been a complete shut down of the news after the internet was taken down by the Ayatollah Khamenei, well known for not being the brightest guy in the world. He further made life more miserable for Iran's population of 82 million by increasing the cost of gasoline by 50 percent. As a result, young people have taken to the streets to protest that they can't make a living by any means. Performers at musical concerts, particularly those featuring female vocalists and musicians, are being arrested, and a full 25 percent of the population is now living in poverty. The young people have reached a breaking point. The Revolutionary Guard was ordered to crack down on the young protesters and as a result sources say that 200-300 young people have been recently killed along with thousands arrested to suppress the protest. Not good news when a tyrannical government is killing its own people.

What it does say is that the oil tariffs of President Trump are working to bring the government of Iran to heel. Iran has a long history of destabilization and consequent overthrown of government by the people. Analysts predict the overthrow of the regime of Ayatollah Khamenei within the year for the simple reason that the corruption it has created has become so intolerable that the whole country is soon to break out in rebellion to throw out the people involved in this corruption.

The same scenario has just taken place in Lebanon and will soon likely happen in Venezuela as well. A month ago in Lebanon, young people began demonstrating to protest the corruption of Prime Minister Saad Hariri over the past three years. In a very brief time the protesters were successful in throwing out this billionaire politician and his corrupt family and are now looking to replace him with a leader that will serve the interests of the “patriots”. You won't see this in the news because the media does not want anyone getting the idea that the ultimate power in any country is and always has been in the hands of its people.

Tyranny does not work. War is not the answer. Killing the young of your enemy in the streets or on the battlefield is no longer tolerable. There are other means of restoring power and authority to the people and ridding nations of self-serving oligarchs. Hats off to President Trump in taking the necessary measures to help set in motion a new era of world peace.