On November 11, 2019, Q made reference to Project Looking Glass in post 3585 with the accompanying comment: “Going Forward in Order to Look Back”. Q has demonstrated remarkable prescience in the past two plus years, so I pay attention to such announcements. So what is Project Looking Glass (PLG) and what are the implications of this post?

Simply summarized, PLG is a highly classified scientific project of reverse-engineered off-world technology at both the Los Alamos National Lab in New Mexico and Facility S4 at the infamous Area 51 at Groom Lake in the Nevada Desert. The PLG technology under research deals with time distortion, specifically dealing with observing the quantum effects of an artificially produced gravity wave on time. From documents released through the Freedom of Information Act and various leaks over the years by scientists and technicians involved in the project with first-hand information, much about the project has been exposed for public review and understanding.

The LG device, also referred to as the Orion Cube, utilizes six electromagnetic fields, and a height adjustable rotating cylinder housed within the center hole of a doughnut-shaped structure (below) which is injected with Argon gas. The entire assembly can be rotated 90 degrees from a horizontal axis, allowing scientists to warp the local fabric of space-time both forward and backwards by long or short distances relative to present time. As the power is fluctuated into the magnets and the orientation of the magnets is changed, it dials into the probabilities within hyperspace, contacting wormholes to view various probable universes. The scientists working on the project quickly found out that the device was multi-functional. Through a variation of power settings and alignments, the device could produce images that dealt with future probable events which might take place on Earth. 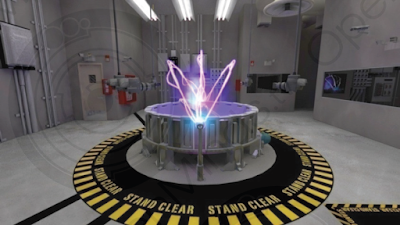 As fantastic as it may sound, the LG device has been and is being used to predict the potential probability of future events on Earth. Once the device is tuned properly, images of probable future events are projected in open space within the fields, similar to a hologram. The data output of the device (images and sounds) is then captured via high resolution audio-video capture devices. If multiple probabilities of the same event are displayed, they are de-interlaced by specific software platforms. Next to the device are two “transport pads” which can teleport any physical matter including humans from one location to another instantly, but not always reliably, with some unfortunate disastrous outcomes having occurred during testing.

Above the door frame leading into the S4 lab (on “Alice's Floor”) that contains the Looking Glass Project at Area 51, there is a three-foot tall stuffed White Rabbit wearing a royal maroon vest, with gold fringes, and black buttons, holding a backward watch. In "Alice in Wonderland" the White Rabbit is introduced as always running late. He carries a watch that is running backwards but when viewed through the Looking Glass, it shows time correctly. "Going down a deep rabbit hole" is an oft-heard phrase when dealing with government and military cover ups and the black ops world; there is a reason for this - the government uses the ALICE CODE.

My take on the timing of Q's post is that we are fast approaching an incredible disclosure of knowledge that has been kept from the general public about topics such as free energy, time travel, and the agreements and space ventures with off-world civilizations that have been going on since after World War II. Such disclosure will turn our civilization on its head in a good way, moving us ahead by centuries in the flash of an eye. Authorized leaks about critical matters of disclosure have been increasing for some time with the aim of softening the psychological impact of so much change occurring so quickly.

The Looking Glass Project device has been under study since at least the early 1950's and has reached a point of refinement today where it is quite usable. Our scientists have learned how to manipulate both time and space. It is now time, by intergalactic imperative, to share that knowledge for the benefit of all humankind on planet Earth.

Along the way it was determined what events would be causation events for the ultimate splitting of humanity into what will become known as the J-Rod’s and the Orion Beings. That information from the Looking Glass has been supported by the direct testimony of both the J-Rods and Orion Beings of the future, according to their written and oral histories. This finding was further supported by observation of data from the quantum cube gift (Orion Cube) given to President Eisenhower in 1954 by off-world entities.

This was not the only quantum cube gifted to Earth for protection and to accelerate our progression toward taking our rightful place in the larger galactic community. The technology has already had a history of use and abuse on Earth since we received it. With a peak into our own future, the Looking Glass devices, along with Stargate portal technology, were dismantled for a time as a measure to protect humanity and the Earth based upon the totality of information collected from a catastrophic probable event that was likely to occur in 2012. Perhaps, by being able to see our probable future with the LG device, we were able to avoid the apocalypse prophesied for so long for the year 2012. So the Looking Glass device has already been of great benefit to humankind.

This all sounds fantastical. It is not. Nor is it just another unsubstantiated conspiracy theory. A Great Awakening is underway on the Earth in this New Age of Aquarius. The world is about to change in magnificently unforeseen and unprecedented ways. Future probabilities are now largely known, anticipated, and prepared for. We've been able to warp the space-time continuum to our benefit for quite some time. The good news is that the story ends well. The bad news is that there will be hiccups along the way. Keep an open mind. Be willing to suspend disbelief. And get ready for the ride of your life!
at November 14, 2019