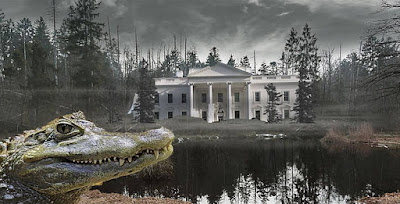 The publicly broadcast impeachment hearings have brought a perspective to light that I had not considered before. What has been overwhelmingly apparent heretofore is the exercise of a soft coup by a deeply entrenched bureaucracy of unelected officials in government, relentlessly attempting to remove the president by every conceivable illegitimate means from his duly elected post since his election. Donald Trump has vowed to clean up the swamp of bureaucrats in Washington while it has been desperately fighting back to hold its ground. In the end, with the rule of law on his side, I believe President Trump will prevail over these initial skirmishes with a major thinning out of the bureaucratic elite who have come to believe it is their right to make policy and run government.

The imminent Inspector General's report will initiate the indictments of many of these same attacking members of the entrenched bureaucracy, thinning their ranks and sending the most notorious among them off to the gallows or Gitmo. Serious crimes have been committed by many in the swamp, most preceding the current administration and the recent acts of unlawful espionage, sedition, and treason. Those in the swamp fighting so desperately right now know that the Justice Department has them dead to rights with prosecutable concrete evidence. The insane attacks on the president are their last stand, and they know it. Those who speak the loudest in opposition are likely the most guilty. Their remaining choices are few – fight, run, or commit suicide. Their end is unavoidable and imminent.

What is new and striking for me came out with the witness interviews of ambassadorial personnel. Their testimony did not support any incrimination against the president so much as it showed that they were personally upset that the president had usurped their power and authority in rewriting foreign policy that impacted their roles. They were upset or saddened that the president was exercising his constitutional authority to change foreign policy to one that opposed what they believed in, and that he discharged ambassadorial personnel at his discretion without apparent cause. The media chimed in when Attorney General Barr reminded everyone that the president was acting well within his constitutional authority. Their testimony was little more than sour grapes and out of place in the context of an impeachment consideration.

Throughout the world there are 75,000 American personnel assigned to embassies and consulates. It is a burgeoning bureaucracy with security detachments that is outdated and for the most part no longer necessary in an age of instant virtual communication. By and large this network was built after World War II as a front to monitor the Cold War with the Soviet Union. In virtually every field station in every foreign country a fake radio network was established to spew propaganda in an effort to combat and take down the old Soviet Union. These secret tendrils controlling all the world's media in every nation still exist today, but they have morphed into something more twisted and criminalized that far supersedes their initial Cold War objectives. 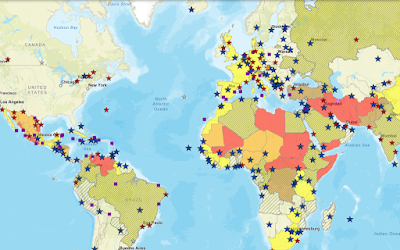 After the fall of the Berlin Wall, Russia emerged in the 1990's as a democratic Christian nation. The nuclear warheads pointed at the US still existed, but nonproliferation agreements were dismantling these to close out the Cold War. But those people on our side in particular that were getting big fat pay checks to fight the Cold War didn't disappear. Literally thousands of 'agents of deceit' continue to operate to this day in Ukraine, Georgia, Azerbaijan, Bulgaria, Romania, Poland, Latvia, Estonia, Serbia, Montenegro, Kosovo, Albania, and Macedonia. These field stations are as busy today as they were during the era of the old Soviet Union, only now they are busy manufacturing plots and endlessly stirring to keep any action going that justifies their continued existence. Blood continues to be drawn around the world incited by those who continue to profit by such conflict, incited too often by American diplomats solely to keep their power and position.

As the Cold War ended, many of these operatives tied themselves to organized crime while retaining their ties to the “Cold War survivor” organizations in the US. While the President has sought accord with Russia, those around him “dance with the devil,” enmeshing themselves in aging plots and affiliating themselves with what has become a vast criminal underworld that runs an ugly organization of drugs, human trafficking, and pedophilia some call the Kosher Nostra. It has become clear that those around Trump have created their own “swamp” within the dregs of CIA plots decades old, a love affair between the ignorant and greedy and “oligarchs” and “facilitators” that emerged during the power vacuum created inside the former Soviet Union.

Since the fall of the Berlin Wall, every president until Trump has fallen in line and largely overlooked what has been going on, profiting in huge ways from this bureaucratic rot. Like their president, many American institutions saw a continuation of the Cold War charade as fertile ground for creating something likely to be useful. Throughout the world their goal was to plant the seeds of rot from within many nations, creating weakened states whose resources could be plundered and their people enslaved.

This is the America inherited by Donald Trump. Those around during its creation are long gone, those who understand its mechanisms are dead, retired, or silenced. The institutions capable of resisting were long ago destroyed, and, as the impeachment process will prove, the endeavor itself will be fruitless except, of course, for airing the “dirty laundry” of the criminal underbelly that existed long before Trump took office.

Until the controlled press and rigged elections change, nothing can or will be fixed in America, even with Trump. All mechanisms of informing the public are now subject to newly minted “fake news filters” under the control of the “worst of the worst” self-serving bureaucrats. Ignorance is institutional in America. Within our regrettable culture of ignorance, the criminalized mechanisms of the Cold War with the defunct Soviet Union have continued to play out unchecked. Trump wasn’t targeted exclusively by the Deep State but by something even more sinister, the vast mechanisms of the Cold War that survive to this day.

Unfortunately, this outrage will never find its way into a history book, will not be taught at any university, and certainly will not enjoy a part in the narrative of the 20th and 21st centuries where such truths have long been hidden or forbidden. Only when we pull back our embassies and consulates from most of the world and dismantle its antiquated Cold War network will this enemy of all people in the world disappear. Trump is only the beginning. From the year 2024 and beyond the United States will need leadership that continues to remove the vast tentacled bureaucracy that holds us to our warring unproductive meddling past.
at November 19, 2019