the Final Days of Madam Speaker 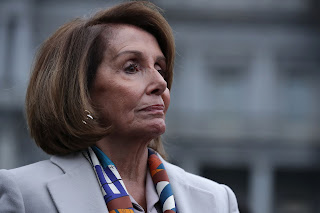 Trump is odious, mercurial, boisterous, confrontational, and self-aggrandizing. He will never change. Trump is Trump. Get used to it. It is not an accident that he sought and achieved the presidency. He was chosen and well vetted by a clandestine group of patient and powerful patriots a long time ago to take on the challenges of the presidency that he continues to overcome and endure. Can you think of another candidate who could have withstood the relentless scrutiny and assault on his legitimacy that he has faced in the last four years? Nor can I. Despite his character, Trump is squeaky clean. There is not a single illegal act from his personal life and previous business experience that he can be charged with... because he has not done anything meriting incrimination. The Dems and their media cohorts, as well as the Deep State and cabal, have not and will not find anything on him after four years of intense, motivated scrutiny. Trump and his family are very well protected by the powers (that you do not see) that solicited him to seek the office in the first place and continue to support him. He is here to stay. Get used to it.

Nancy Pelosi made a big mistake confronting Trump on his terms. She should have known to control herself, not engage in confrontation with the President or get angry with him; that just fueled Trump's fire. What she did was mirror-imaged the President's dynamics, got suckered into fighting the President on his own terms, and ultimately yielded to internal party pressures to initiate impeachment, which she knows is entirely illegitimate, expensive, and a waste of time, energy, and party credibility. Because she did not understand the dynamics of confrontation, battling an adversary that she really did not understand, choosing to mirror his dynamics will be the move in the game that leads to her checkmate, game over.

She legitimized the process of impeachment as a desperate measure of her own self-aggrandizement. In trying to explain why the Democrats were pursuing impeachment she further denigrated herself when she clearly demonstrated that she doesn't even understand that she is not representing a democracy; she is a representative in a republic. Big difference. She clearly does not understand her representative responsibilities to the people.

What we are witnessing each day is exposure of the foibles of the Democrat Party. Pelosi surrounds herself with pathological liars like Clapper, Comey, Schiff, and Brennan, and cowards like Susan Rice, and in turn has knocked Biden out of the presidential race by not battling the President with time-honored and effective Congressional tactics.

The Democrat Party was once formidable and effective when it operated under the leadership of Henry Waxman. It got big things done. Waxman understood how to form a coalition and effectively avoid confrontation when it served no useful purpose in advancing anyone's agenda. The Waxman machinery is reluctantly gone today, replaced by the likes of Adam Schiff who really doesn't have the skill set to handle anything very politically sophisticated. We have reached a point at which the House of Representatives are not dealing with the issues that are most critical and important to the American people. The fires in California are a case in point. As California burns, Nancy Pelosi delays dealing with this crisis in her own state, fiddling in Washington like Nero did in Rome.

Once Biden is gone, who does that leave? Sanders who espouses crazy socialism and transgender rights, and Warren who wants a $27 trillion Medicare program - both are absurd. The Democrats do not have a valid candidate. The rise of Ocasio-Cortez and her uninformed ilk has been the political play that is ushering in the hasty and sad departure of Nancy Pelosi, who at one point in her career as a leader had been very effective.

We are witnessing the painful end of Nancy Pelosi. And pretty much the end of the Democrat Party as well.
at November 05, 2019