Open Wide the Doors of Perception 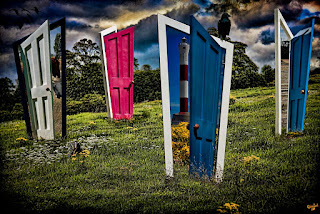 One of the greatest mysteries of both philosophy and science that has yet to be solved is how consciousness happens... and what happens when it goes wrong. With all our advances we still really don't know how the brain and body give rise to consciousness. Billions of neurons in the brain are working together to generate a conscious experience – not just any conscious experience, but your own individual experience of the world around you and of yourself within it. So how does this actually happen?

We experience joy and suffering; do other animals? Do they have a sense of self as well? If you have pets you have some sense of the answer. And what about plants? And as computers get smarter and faster, will there come a time when your iPhone develops a sense of its own existence?

Consciousness involves both awareness of the self and awareness of the world. Think of your brain in its bony skull, trying to figure out what's out there in the world. There's no light or sound inside the skull. All the brain has to go on are streams of electrical impulses which are only indirectly related to things in the world. Perception becomes a form of informed guesswork in which the brain combines these sensory input signals with its prior beliefs and expectations about the way the world is to form its best guess about the cause behind the signals.

The brain doesn't perceive anything directly nor does it interpret the world around it entirely from signals coming in from the outside world. It depends as much, if not more, upon perceptual predictions based upon experience flowing within it. We don't just passively perceive the world, we actively generate it. The world comes as much, if not more, from the inside out as from the outside in.

Visual illusions can deceive the eyes and therefore the brain. All of us can be fooled by a good magician. But how can you be deceived about what it means to be you? Most of the experience of being a person is so familiar and so unified and so continuous that it is difficult not to take it for granted. But we shouldn't take it for granted. All the ways we look at ourselves as a unique self can come apart. The identity of the self in the brain is of rather fragile construction. Even the brain's idea of what the self is is a matter of a best guess, a kind of controlled hallucination.

The way we perceive the world outside is quite different than the way we perceive ourselves. The outside world is perceived as a bunch of objects; even the body is an object, a thing. But we don't perceive the world within us as objects – unless we have problems. We know we have a heart and kidneys and a spleen, but we we don't sense them as objects. Perception of the internal state of the body isn't about figuring out what is there, but about control and regulation – much of it autonomically – keeping our physiological variables within a narrow range of conditions to continue our survival.

Our conscious experiences of both the world and our self, since they depend on the identical mechanism of predictive perception, all stem from this basic drive to stay alive. We experience the world and ourselves with, through, and because of our living bodies. We literally predict ourselves into existence.

What it means to be me cannot be reduced to or uploaded to a software program running in a robot, no matter how advanced. The biological mechanisms that define us depend upon a living, breathing biology. Just making computers smarter is not going to make them sentient.

Finally, our way of being conscious is likely just one possible expression of being conscious. Human consciousness is just one example in a vast array of possibility in a very, very large universe. With the application of quantum thinking, a growing wealth of research suggests that not only do all living things have some form of conscious awareness, but so might all inanimate matter and energy as well. We must be careful to leave the door of possibility open to all manner of perceptual predictions, both on our own planet and beyond.

Understanding the biological basis of conscious experience is one of the great challenges for 21st-century science. As with life, so with consciousness, once we start explaining its properties in terms of things happening inside brains and bodies, the apparent insolubility of what consciousness is starts to fade away.