What Time Do You Have? 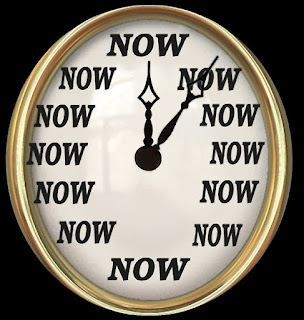 What is happening right now? Is your “now” the same as my “now”?

It seems like a simple question, that is, until you introduce relativity. You see, you and I experience time differently. For one of us, time is moving slower. Two events that you see in succession I see as happening at the same time. What is now is fuzzy, according to relativity.

Over the years, scientists and philosophers have come up with different ways to help think about how time, existence, and the now fit together. We need a new way to define reality and the now.

Previously, there have been two main ways to understand the progression of time. In the first, there is an objectively real present. Events in the past and in the future do not exist. The only reality, the only thing that is real, is the present.This idea, however, runs into some serious problems when you start taking into account relativity. To see why let’s do a thought experiment.

At the same time, however, there is an airplane traveling through the clouds. Passengers on this airplane also see the lightning bolts as their airplane is exactly midway between them. But what they perceive is different from you. Because they are traveling towards one of the lightning bolts and away from the other, they, in essence, meet the light from the bolt ahead of them. They see this bolt first. They are traveling away from the bolt behind them, so it looks like this bolt strikes later.

But remember one key fact - light always, independent of reference frame, travels at 299,792,458 meters per second. The passengers on the airplane are midway between the bolts, and, within their reference frame, it appears that the light from the two bolts traveled the same distance. The only conclusion that the passengers on the airplane can make is that the bolt ahead of them happened first.

Passengers on the airplane think one lightning bolt occurs before the other, while observers on the ground see them happen at the same time. According to special relativity, observers may not agree on simultaneity. This is the problem of “simultaneity” and is one of the conclusions from special relativity - different frames of reference may not agree on the order of events. What we call the “present” is actually subjective.

What other options do we have? There is an alternate idea of how to think of time. Instead of thinking of reality as three dimensional, we can instead add in the fourth dimension, time. After Einstein formulated relativity, Hermann Minkowski came up with the idea of four-dimensional Minkowski space-time. In this four-dimensional space, simultaneity is no longer a problem. Rather than solely measuring the time between events, observers on Minkowski space-time would instead measure the space-time between events. This space-time distance should be the same for all observers.

In this four-dimensional world, events in the past and in the future are all equally real. Because of this, there is no special moment called the “present”. There is no moment that is happening now. One could argue that there is nothing “happening” and there is nothing “becoming”. Everything, from objects to events, simply exists. Our definition of “now” doesn’t exist in the Eternalist Universe.

Let's look at time in a different way. Physics is all about understanding becoming. Physics explains how things happen - why a ball rolls down a ramp, how a car skids to a stop, or why the Earth revolves around the sun. Without change, physics does not exist.

There is a third alternative. A civilization that thinks the Earth is flat may have a notion for ‘up’ for which all ‘up’ directions are parallel. On learning that the Earth is round, the notion of ‘up’ must somewhat be revised: ‘up’ in Sydney points to a different star than ‘up’ in London. This does not mean that ‘up’ is illusory: it means that it works a bit differently than we thought.

Similarly, our terms for “now”, “present” and “becoming” need to be revised. All of the events throughout time cannot be put on one timeline. We cannot map out the progression of every event through time. Instead, events must be tagged with both a time and a location. There is still the present, and there are events happening, but what is defined as the present may be different for different places.

What we directly experience is local becoming, not global becoming. That is: we are directly aware of things happening around us, not far away in the universe. It's just another way to think about time. If we try to define time without its associated space, we see problems, like the breakdown of simultaneity outlined above. Each place has its own present, but we can’t separate time and space. They must exist together.

Adapted from the writings of Elizabeth Fernandez
at January 04, 2020