Prepared to Prevent All Wars 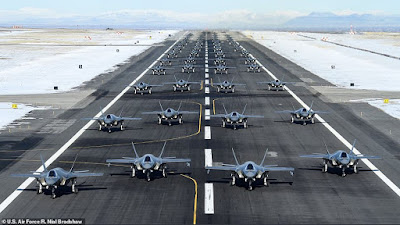 The U.S. Air Force has just performed a huge show of strength by launching 52 fully-armed F-35A Lightning II stealth fighters, the most advanced fighter jet ever flown, in a single wave from a base in Utah. The exercise was carried out by the active duty 388th and Reserve 419th Fighter Wings, which said it showed the Air Force's preparedness to deploy a large force of the F-35As on command.

Fifty two is the number of American diplomats and civilians seized by Iran during the 1979 hostage crisis, and the number of targets that Trump has threatened to strike in Iran if the regime retaliates over Soleimani's death. Trump says that the United States will bomb 52 targets if just a single American is harmed.

Sabre rattling? I don't think so. Trump has restored America as the world’s lone superpower and bulwark against any further armed conflicts in the world. One can only hope that the ayatollah is sane!!! You don't tug on Superman's cape. You don't spit into the wind. You don't pull the mask off the ole Lone Ranger. And you don't mess around with Trump.