For the Love of our Elders 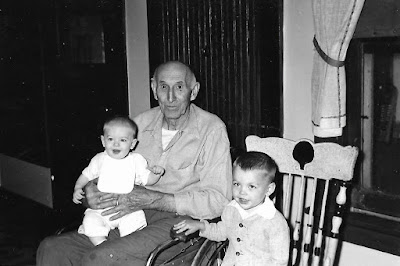 I have been a traveler since I was three weeks of age. Most weekends of my early years, my siblings and I would pile into the car after midnight on Friday night, when our father got home from work, to ride one hundred miles with our parents from our home in the city to “the country”. The destination was always the same – the little town of Sigel, where my father was raised as a boy, where I continue to live to this day.

During the first ten years of my life, we visited Uncle Dave Henderson at his farm on Spring Creek Road, where my father spent much of his formative years. Uncle Dave lived alone in a drafty old wood frame farm house, confined to a wheel chair because of an affliction he suffered earlier in life. He and his brother had been raftsmen during their early years in the late 1800's when timber was the main industry in this part of Pennsylvania. Dave and Bill would float the cut logs on the Clarion River down to the Allegheny River and on to the Ohio River in Pittsburgh, from where they likely walked or rode wagons the hundred miles to get back home. The forests in these parts provided the lumber needed to build our great nation late in the 19th century, some of which no doubt floated down the Mississippi River and frontiers beyond.

I absolutely loved to visit Uncle Dave all of those weekends as a little boy, so much that I would dream about the day when I could come stay with him and help him around the farm. Though he passed away before I reached the age of ten, many fond memories still bounce around in my head from those early times. Even though we arrived late at night, sometimes Dave would still be waiting up for us. We'd be sleepy little kids, for sure, but fought droopy eyes to stay awake and hear Uncle Dave tell stories while we nestled between our loving parents on the comforters stretched across the couch in front of the giant stove in the living room that kept the house toasty.

There were stories of wild wolves that howled at night close by, and stories of children who went into the woods and were never seen again. How could you sleep with tales like that! The extent of his stories knew no ending as he had lived a full life before becoming an invalid – lots of woodsy stories and adventures moving logs down the river as a young man. 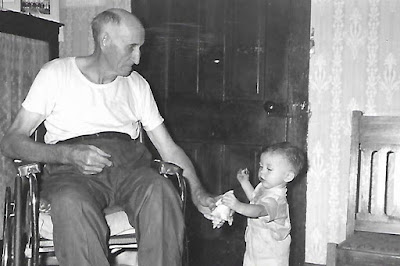 My younger brother Donald and I didn't go into the woods alone (just in case there might still be some of those wolves around), but we did spend a lot of time exploring the barn – climbing in the rafters, shinnying up the big rope that hung from the rafters, jumping into piles of oats, looking in upon horses kept below in their stalls, and building intricate castles out of hay bales. We would dig for red worms for fishing, always abundant in the rich soil behind the old chicken coop where Don and I swatted wasps and collected their nests.

It was there that I learned how to look for spiders under the seat in the outhouse, there where I got to sit behind the steering wheel of an old Model T Ford in the garage, and there that I learned to love to climb apple trees. Dave was a good cook, so I got to experience some genuine old timey recipes that you never hear about anymore - like ponhaws and blood pudding. Any time we missed a weekend, Dave would write me a letter on his old typewriter and I would respond in my childish handwriting on some little note cards. After a lifetime of lots of my own memories, and moving around a fair amount, I still treasure some of those old keepsakes. The habit of regular correspondence has seemed to have stuck as well! 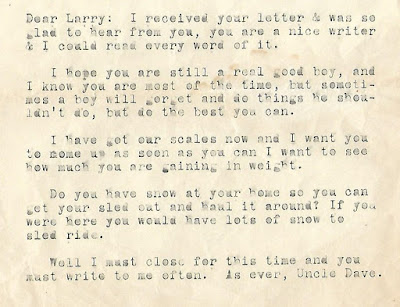 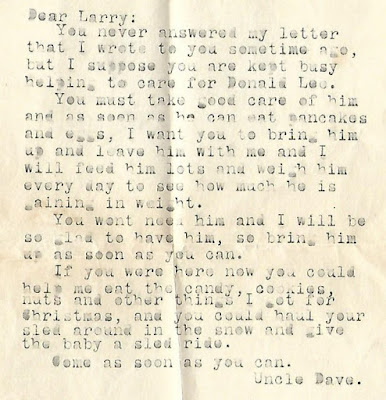 I've always had older people in my life that I admired and loved and sought to be more like. There is always something rich to be harvested when peering into the hollow ancient eyes of those who have lived long lives of struggle and joy. It is still important to me to stop and take the time to say “hello in there”, whether to a frail stranger or an old acquaintance or a fading relative.

So today is my 68th birthday. By the standard of many of my peers, I have reached old age, but when I look in the mirror I still see a dancing spirit ready to engage the world in adventure. While I have a pile of tales of my own to tell, I'm not yet ready to hang up my dreams and start talking 'bout the goodle days. I hope that I have learned a lot from the stream of elders that have come before and inspired me, and I hope I have listened closely enough and applied their generous wisdom to create a better version of what an old person should be – at least the best version of who I can be.