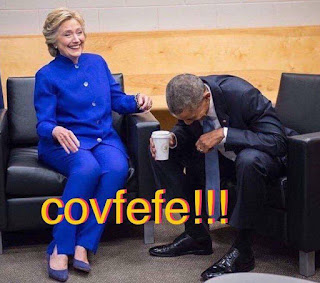 Just after midnight on the last day of May in his first year in office, the President tweeted: "Despite the constant negative press covfefe." As I reported previously in my blog of April 15, 2020, no one at the time knew what it meant. Surely it was a mistake that the president would soon delete. But after five minutes, he didn’t. Then more time passed. Before long, social media was in a mad dash to try to define Trump’s typo. Those on the Left had a big chuckle all around over his ‘ignorance’ of spelling and vocabulary, saying there was no such word. The main stream media went crazy and joked that he couldn't spell coffee.

We've had three years to discover that the President knew exactly what he was tweeting in 2017. CoVFeFe actually means a lot of things. In Arabic it means that “I stand up against the ancient fallen ones.” The President was taking a stand that despite all the negative press he received, he would hold fast against the ancient fallen ones, the evil false darkness – in other words, Lucifer and his ilk.

But COVFEFE is also an acronym representing “The Communications Over Various Feeds Electronically for Engagement Act”, a bill introduced soon after the tweet into the U.S. House of Representatives on June 12, 2017 – H.R 2884, during the 115th Congress. The bill was updated on January 9, 2020, removing all Huawei and Apple 5G technology that runs at 60GHz, and further updated on March 9, 2020, when the President committed to securing safe 5G technology.

The reason for the removal of the Huawei and Apple technologies is that 60 GHz is the resonant frequency of the oxygen atom, which causes a water molecule's oxygen atom to spin, causing the water molecule to vibrate very fast and heat up. In a human body, this has two effects. First, our lungs cannot absorb such water and so we drown in our own fluids. And second, the water within our cells literally superheats due to the microwaves of 5G spinning the oxygen in water to a point at which the organs explode. This occurred in China at the beginning of the Covid crisis and elsewhere where people just dropped dead, bleeding profusely from their mouth, nose, and ears.

The third thing that CoVFeFe stands for is that it is a type of soft magnetic alloy made from Cobalt, Vanadium, and Iron (Patent No. 3695944A). This superalloy acts very much like a magnet on your refrigerator. When attached to a 5G system, turns it into a Tesla healing system. The CoVFeFe alloy cleans up 5G impurities at the ionic level, keeping oxygen from being depleted. None of the harmful effects of 5G occur with its application. The alternative 5G created by the Alliance that the President is promoting does not operate at 60 GHz because it utilizes this superalloy.

The Chinese knew about this all along. They even have their own patent for it. It turns out there are countless applications for this superalloy across many industries, and it is especially useful in the zero gravity environment of space. With its application in the United States, the Alliance has been able to virtually neutralize the negative effects of any and all Huawei and Apple 5G technologies.

There is more to the use of the superalloy CoVFeFe than this, however. Much more. There is the matter of the contested Wall that is being built on the southern border with Mexico. There are transducers (meaning they can receive and transmit signals) at the bottom of the wall in the concrete footers that will ultimately extend across the entire southern U.S. border when it is finished. These transducers emit a wave that neutralizes 5G's 60 GHz frequency, rendering it harmless. In addition, the transducers enable those monitoring them at ICE to detect the footfall or movements of anyone within 50 feet of the Wall. They also monitor biorhythms through the heartbeat of anyone in proximity, so that agents will know exactly how many people there are, their gender, their relative age, and even their exact weight. No more illegal crossings. No more human trafficking. No more drug trafficking. No more foreign criminals and terrorists sneaking into the country.

The Wall has been purposefully designed to essentially be a Tesla device. (Remember President Donald Trump inherited the entire Tesla research library from his Uncle John Trump.)

The result of the intervention of this president into the advance of communications technology is that 5G is no longer a threat to human health, nor will 6G be. CoVFeFe. Now we know some of what the President knew back in 2017. Now we know why members of the Deep State are no longer laughing.