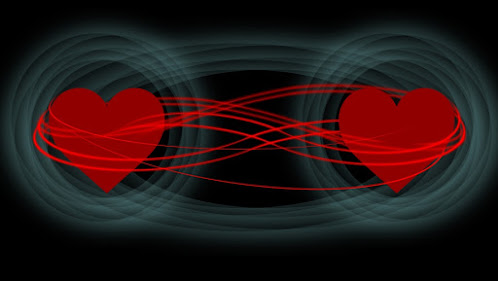 For one thing, they're both mysterious — we don’t really understand how either one of them works. But they share something else — what scientists call "entanglement."

People get entangled with each other when they fall in love, and it can start when they’re nowhere near each other, perhaps catching each other’s eyes for the first time across a crowded room.

And it seems that tiny, subatomic particles — things like electrons or photons — can also get entangled with each other at a great distance, in a way that physicists still don’t understand but are already starting to make use of.

“Somehow what happens to one particle can have an impact on what we would expect the second one to do, even if those particles are nowhere near each other.”

When it comes to atoms, language can be used only as in poetry. The poet is not so concerned with describing facts as with creating images and establishing mental connections.. Emotions and quantum entanglement are essentially metaphors for each other; each might shed a little light on the mysteries of the other.

What if our fate is not only our own? What if parts of us are entangled with parts of other things, other dreamers?

Entangled particles break the rules. They are influenced by each other, instantly, no matter how far apart they are - even if they’re on opposite sides of the universe.

If you observe an entangled quantum particle, you get an answer. And at the exact same moment, you know the answer for its partner. Those answers are related.

And the idea did have problems. But over time, scientists have tested it and have slowly addressed most of the problems, or loopholes, as some call them.

But one has remained: "settings independence." You can think of it as free will — the possibility that someone, or something, somewhere, is actually manipulating the particles to make it look like they were entangled when they really weren’t.

Was there any third party in the past that could have nudged the choice of measurements on each particle and the behavior of those particles themselves?

It’s a minute, theoretical possibility, but one that had not been totally ruled out.

Anton Zeilinger is a wizard at devising ingenious ways to perform quantum experiments. He’s got a special laser that makes thousands of pairs of entangled particles of light, which he splits and shoots out in opposite directions, like across the Danube or between the Canary Islands off Morocco.

To work on closing this last possible loophole, Zeilinger and his lab fired up their laser on top of a building in the middle of Vienna late one night and shot one beam of entangled particles towards a detector on a building to the north, and the other towards a detector to the south. At the same time, they were pointing telescopes out of windows of those same two buildings, towards two stars more than 600 light years away, and farther away from each other than either is from the Earth.

The idea was that in the time it took the laser to shoot its particles across Vienna, the telescopes could use the ancient, 600-year-old starlight to make measurements on those same particles.

That starlight essentially “decided” what measurements to perform on Zeilinger’s entangled particles, meaning that if the results had been manipulated, it could only have been by events “that happened very far away, very long ago.”

The experiment confirmed the reality of quantum entanglement to the highest degree ever. “We have shoved this loophole back by a factor of 10 million billion,” says David Kaiser at MIT. In other words, the last loophole in the theory is almost completely closed. But not entirely. It’s still theoretically possible — although even less than ever — that even the entanglement they found using 600-year-old light could’ve been faked.

So, for their next experiment, Zeilinger’s team will use light sources from 3 billion to 4 billion light years away. Scientists want to make the loophole so small, it almost doesn't exist – to prove that entanglement is here to stay, and really does describe how the universe works, even if Einstein didn't like it.

Quantum entanglement is almost certainly real. Scientists have proven beyond just about all doubt that it works.

As for how it works, well, that’s another question. A big one. And even scientists working on the phenomenon basically say they still have no idea.

And then there’s another big question.

Sooner or later, someone is going to ask — maybe you, because it’s not enough to unlock the top of your head and blow your mind — you want to know, ‘What is this good for?’

Turns out, it's probably good for some really important things, and even without knowing how it works, applications of quantum entanglement are already being developed.

One is quantum computing.

In the foreseeable future, we will actually have computers that make use of this entanglement. And if so, they could do calculations vastly faster than they can be done by the classical computers that we now use.

Then there’s something called quantum cryptography. By using these entanglement techniques, you can send messages which literally cannot be intercepted without your knowing about it. In other words, virtually unhackable messages. The technology is already being developed in China. There’s even the possibility of unhackable electronic voting. Sure could use that in this election cycle!!!!

So quantum entanglement actually may be good for something. But what was all that talk back at the beginning about love? It all comes down to Einstein’s characterization of quantum entanglement. What really nails it is this kind of ... spooky action at a distance. Seems to me that that is still a pretty good description of LOVE.