Technology and the Mark of the Beast 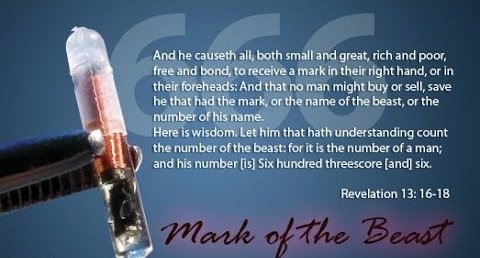 The key prophecy in the Book of Revelation is where John the Revelator speaks of the mark of the beast where in an end time scenario an evil figure emerges that tries to place a tattoo or mark on the forehead or right hand of everyone so that everyone could buy, sell, and trade without digging out a credit card or cash. Sound familiar? Visions of Bill Gates? There is also a prophecy that there is a counterforce that arises at the same time in opposition to the beast, consisting of 144,000 special souls – or soldiers of Christ – that combat the beast and wake everybody up. The good news is that in the story of the conflict of the light versus the darkness, the light wins.

What is it that these 144,000 souls are supposed to know? What is it that empowers them to effectively counter the beast? And who are these souls? Perhaps they are us. It begs the question of what do we have to do to empower our own souls at this very critical time – to become the soldiers of Christ that we are waiting for? We certainly don't have to just sit back and take it. In this time in which we have been ordered to lock down and shut up, perhaps it is a time in which we need to rise up and speak up.

A lot of the awakening that is going on right now involves our wrestling with this issue as individuals and as a society. What can WE do is what is now being asked far and wide by the silent majority. These next couple months are going to decide our fate for ever after. Everything is going to be reconciled very soon and it will have to be “we the people” who must wake up and dash the beast against the rocks.

If we don't rise up and speak up as a people by the time of this election, a hell is going to be unleashed on this planet that has never been seen before... all in the name of “saving the planet”. For starters, there is the World Economic Forum, consisting of the likes of Klaus Schwab, John Kerry, Al Gore, and Prince Charles, that plans to implement what they call “The Great Reset” in January 2021 - because they believe we need to save the planet from climate change. Their answer for how we save the planet is to turn human beings into machines, merging genetic technology and neuro-technology with computer technology and nano-technology that results in one seemless technology that you will no longer be able to recognize as human.

This is the plan they have been working on for a very long time, and right now it is in our face. While Klaus Schwab and the World Economic Forum have stated that the whole idea of the human being as a natural concept is going to change. Our bodies will be so high tech in their planned future that you won't be able to distinguish between what is artificial and what is natural. To turn humans into machines is their response to climate change and save the planet.

This is not something that they merely intend to implement – it is something they have already started. If the election throws ultimate power back in their direction they will rush to install chips in our hands, our heads, under our skin, and any other part of our body they can access. This is, incidentally, why they need 5G so desperately. Without 5G and 6G their plan is not going to work.

So where are they going with this. What is their ultimate agenda?

Ultimately, they are trying to create a rise of the simulated being. They are attempting to create an entirely new reality for us and want us to transition into seeing ourselves more and more as virtual beings. We would spend most of our time in a new virtual world consisting increasingly of virtual people, virtual replicas, and new AI humans. They believe we have to become simulated humans to forestall a climate change catastrophe. What they are trying to do is create a sort of digital Noah's Ark in a simulated world populated by human memories and fake digital human beings that would be able to ride out this cataclysm and perhaps after it is over one could choose to pop out of the simulated body and reinhabit a flesh and blood body once again.

I emphatically repeat the last three paragraphs from my post of two days ago. If we don't want to wake up in a sci-fi world of technological fantasy on November 4, we need to awaken NOW and rise to fulfill the prophecy that has been revealed. The light strikes down the darkness in the end. The story is already written. But it is we who must carry the light forward and fulfill the prophecy. We are the ones we have been waiting for. We are the 144,000.

Tattoos do not sit well with a lot of us. The last time anyone did what Bill Gates wants to do was when the Nazis were marking Jews and sending them to concentration camps. We should all be very cautious when we think about letting them give us any vaccine and put the mark of the beast under our skin. This is a horrific scenario they have planned and we need to fight tooth and nail against it.

We're talking about the fate of the human race. We've culturally evolved to where we have put our fate into the hands of corporations and governments. The problem we face today is that if you speak out against them in any way, shape, or forum, they shut you down mercilessly and sanction you in unforgiving ways. We have an election coming up. Some of those running represent the agenda Bill Gates and his legion of techies are attempting to advance. Some believe it is inevitable human progress to give over more and more control in our lives to corporations and governments – to those few that know better what the herd needs than do we – and to merge our biology with the machines to make a better human for the future.

Then there are those who believe in the free will of the individual to make the best choices about his or her own destiny or fate. There should be little choice in a vote between freedom and giving over more and more control to government and corporations. America was founded upon principles of freedom. Most of us like that idea and are proud to identify with it. Those who would take them away forever are storming the gates of the kingdom. It is time we all stand together and turn back those who would deny us our true destiny.