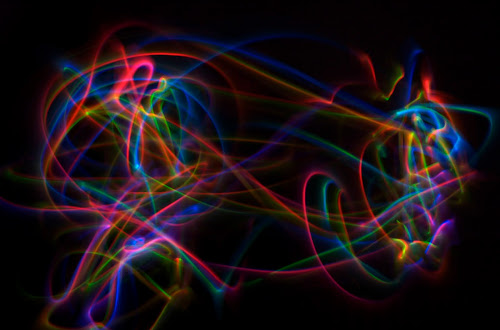 Nonlocality describes the apparent ability of objects to instantaneously know about each other’s state, even when separated by large distances (potentially even billions of light years), almost as if the universe at large instantaneously arranges its particles in anticipation of future events.

Thus, in the quantum world, despite what Einstein had established about the speed of light being the maximum speed for anything in the universe, instantaneous action or transfer of information does appear to be possible. This is in direct contravention of the "principle of locality" (or what Einstein called the "principle of local action"), the idea that distant objects cannot have direct influence on one another, and that an object is directly influenced only by its immediate surroundings, an idea on which almost all of physics is predicated.

Nonlocality suggests that universe is in fact profoundly different from our habitual understanding of it, and that the "separate" parts of the universe are actually potentially connected in an intimate and immediate way. In fact, Einstein was so upset by the conclusions on nonlocality at one point that he declared that the whole of quantum theory must be wrong, and he never accepted the idea of nonlocality up until his dying day.

Nonlocality occurs due to the phenomenon of entanglement, whereby particles that interact with each other become permanently correlated, or dependent on each other’s states and properties, to the extent that they effectively lose their individuality and in many ways behave as a single entity. The two concepts of nonlocality and entanglement go very much hand in hand, and, peculiar though they may be, they are facts of quantum systems which have been repeatedly demonstrated in laboratory experiments.

For example, if a pair of electrons are created together, one will have clockwise spin and the other will have anticlockwise spin (spin is a particular property of particles whose details need not concern us here, the salient point being that there are two possible states and that the total spin of a quantum system must always cancel out to zero). However, under quantum theory, a superposition is also possible, so that the two electrons can be considered to simultaneously have spins of clockwise-anticlockwise and anticlockwise-clockwise respectively. If the pair are then separated by any distance (without observing and thereby decohering them) and then later checked, the second particle can be seen to instantaneously take the opposite spin to the first, so that the pair maintains its zero total spin, no matter how far apart they may be, and in total violation of the speed of light law.

Despite Einstein's misgivings about entanglement and nonlocality and the practical difficulties of obtaining proof one way or the other, Irish physicist John Bell attempted to force the issue by making it experimental rather than just theoretical. Bell’s Theorem, published in 1964, and referred to by some as one of the most profound discoveries in all of physics, effectively showed that the results predicted by quantum mechanics (for example, in an experiment like that described by Einstein, Podolsky and Rosen) could not be explained by any theory which preserved locality. The subsequent practical experiments by John Clauser and Stuart Freedman in 1972 seem (despite Clauser's initial espousal of Einstein's position) to definitively show that the effects of nonlocality are real, and that "spooky actions at a distance" are indeed possible.

In theory, the concepts of entanglement and nonlocality may have applications in communications and even teleportation, although these ideas are still largely hypothetical at this stage. Due to the effects of the uncertainty principle, the mere act of observing the properties of particles at a quantum level (spin, charge, etc), disturbs the quantum system irrevocably, and this would appear to prevent us from using this system as a means of instantaneous communication. However, Anton Zeilinger's work at two observatories in the Canary Islands has shown promising indications that entangled particles can indeed be reconstituted in a different place (although the leap from this to a teleportation device of the kind envisaged in Star Trek is a profound one).  Beam me up Scotty. Maybe, soon come.