The Limits of Intellectualism 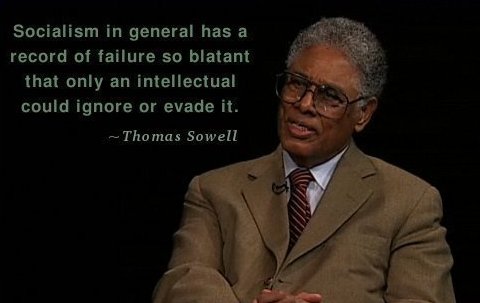 Many of the great catastrophes of modern times have been committed by the experts. FDR's brain trust unnecessarily prolonged the depression by several years; the Wiz-Kids at the Pentagon under Robert McNamara managed to hugely complicate and extend the Vietnam War. You could run through an impressive list of avoidable disasters brought about solely due to the efforts of people with very high IQ's.

Intellectuals are people whose end products are nothing more substantial than ideas. There are other people with great intelligence whose end products are things that we can touch and use. An engineer is not necessarily considered an intellectual because he is judged by the implementation of his designs. It doesn't matter how brilliant the engineer is; if he builds a structure that collapses, he is ruined. When an intellectual has a brilliant idea to rearrange society, on the other hand, if his idea ends in a massive disaster, he pays no price whatsoever.

“The fatal misstep of intellectuals is assuming the superior ability within a particular realm can be generalized as superior wisdom or morality overall,” says Thomas Sowell. The problem is when you step outside your particular area of specialty and proclaim to be knowledgeable about all things because you are an intellectual, it can be like stepping off a cliff.

Intellectuals and academics believe that since knowledge is concentrated in the hands of only a few select people - the best and brightest - that society should give them more power to exercise their superior knowledge for the benefit of all. The intellectual temptation is to say that “we already know everything”, “so if we had all of the power too, then everything would be just fine.”

In truth, the intellectuals don't know everything. If we really got down to numbers, it is likely accurate to say that intellectuals don't know one percent of the consequential knowledge within a given society – knowledge whose presence or absence has serious consequences. The kind of consequential knowledge that proves necessary in governing a nation such as the United States with the biggest economy in the world and 330 million people, you could put together a very large group of academic professionals and they are still not going to possess the knowledge that would enable them to run, say, even a large company, let alone an entire nation's healthcare system, for instance.

All sorts of countries have tried central planning, especially during the twentieth century. The smart people that attempt to run these countries with their revolutionary ideas generally have advanced degrees from prestigious institutions, and they have got mountains of statistics to work with and every expert imaginable at their disposal, yet when all is said and done, when you take the power out of their hands and return it to the free market, then all the hundreds of millions of people who don't have any of those advantages usually end up with a higher rate of economic growth along with a more rapid decline in poverty... essentially because consequential knowledge, by its nature, tends to be diffused widely and will never be concentrated.

Because it is impossible for a few people to grasp all the consequential knowledge that is needed to make decisions for the many, socialism will never work. By spreading power out to the collective base of people in a society, each having an immediate grasp upon a narrow range of consequential knowledge, society will move forward far better, even if in fits and starts.