The Energetics of the Debate 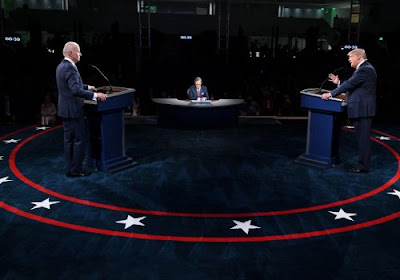 I would like to look at last week's presidential debate from a different perspective – an energetic one. For a moment, let's set aside third dimensional programs and paradigms, opinions and beliefs, and look at what is occurring right now at the level of pure energy. From that perspective, last week's debate between the two presidential candidates was essentially an energetic war on stage representing two quite different timelines. Setting details of the actual event aside, the outcome of the debate will ultimately be scored by the vote we make in one month. One timeline will prevail. How can we know we have made the best choice for America? For humanity?

What I witnessed was two energetic beings of light facing off over moderated questions. By now we are all quite familiar with the personalities and traits of each candidate. Speaking energetically, each has a particular resonant frequency that they vibrate at. We all recognize it, however, it is not something we can see, but it is something that can be felt and even measured scientifically. Each of us pulses at a particular resonance that makes us unique. We are all energy beings. We tend to find a harmonic convergence with those around us who share a similar resonant frequency. During the debate, most of us energetically aligned with one of the candidates or the other. There are few among us who are so neutrally charged as to have remained on the sidelines.

The result of any observer's interaction with the parties to the debate can be found manifest in our emotions, thoughts, beliefs, and such. There were two very distinct timelines represented on that stage. Neither right, neither wrong. Let's set those judgements aside. One timeline was based upon a third-dimensional program and paradigm, one that seeks to continue a third-dimensional way of being – doing the same things we've always done; holding ideas and beliefs that we've always held. The other timeline is seeking to break out of the third-dimensional matrix – break away from the way we have always been.

This can be difficult to see, especially when to do so we are being asked to step out of a very programmed, manipulated, brainwashed way of being. It may seem impossible to do that. But that is what was happening on that stage. The higher version timeline asks us to begin doing things differently, and break away from the old way of doing things.

Forget what the two candidates said. Forget their body language. Turn off the media that supplies additional information. Tune out the noise that both sides are making. All of that can be manipulated. But energy cannot be manipulated. Energy does not lie. Tune out everything except the one station that matters most – your station, right here, right now – your resonance and your energy – your gut feeling. That's your truth. Not what the candidates say. Not what someone tells you. Not what someone trys to convince you of. But what resonates with you!

Dive in to what is playing out right now. Look closely at the two distinct sides. Try on both sides and decide what resonates with you. What do you feel without the influence of anything external? Step away from the spoken words that box us in. Step away from the way the media has boxed us in with how they want us to see the world. There is a huge battle going on both physically and energetically to see who can manipulate the electorate best to their advantage. May we all step away from any and all manipulation and get a feel for what is really occurring. The more you shut off what everyone else is telling you, the more you will have the answers for your truth. The answers lie in energy. Because it's all energy!