The Information Paradox of Black Holes 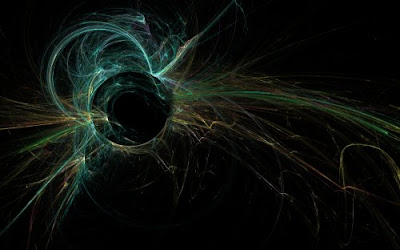 Black holes, some of the most peculiar objects in the universe, pose a paradox for modern physicists. It would seem that two of our best theories give us two completely different - and seemingly contradictory - pictures of how these objects work.

From the perspective of general relativity, black holes arise if the density of matter becomes too large and gravity collapses the material all the way toward its central point. When this happens, gravity is so strong in this region that nothing—not even light—can escape. The inside of the black hole, therefore, cannot be seen from the outside, even in principle, and the boundary, called the event horizon, acts as a one-way membrane: nothing can go from the interior to the exterior, but there is no problem in falling through it from the exterior to the interior.

But when we consider the effect of quantum mechanics, the theory governing elementary particles, we get another picture. In 1974, Stephen Hawking presented a calculation – hκ/2πk≈10^−6(M⊙/M)∘K - that made him famous. He discovered that, if we include quantum mechanical effects, a black hole in fact radiates, although very slowly. As a result, it gradually loses its mass and eventually evaporates. This conclusion has been checked by multiple methods now, and its basic validity is beyond doubt. The odd thing, however, is that in Hawking’s calculation, the radiation emitted from a black hole does not depend on how the object was created. This means that two black holes created from different initial states can end up with identical final radiation.

Is this a problem? Yes, it is. Modern physics is built on the assumption that if we have perfect knowledge about a system, then we can predict its future and infer its past by solving the equation of motion. Hawking’s result would mean that this basic tenet is incorrect. Then in 1997, a new way was discovered to view the situation, seeming to prove that no information was lost at all. Not quite case closed, however. One could still argue that if the information is preserved in the Hawking emission process, then it is inconsistent with the “smoothness” of the horizon—the notion that an object can pass through the event horizon without being affected. Given that the option of information loss is out of the question, that the black hole horizon is in fact not a one-way membrane but something like an unbreakable wall, it was called a firewall.

This confused theorists tremendously. As much as they dislike information loss, they abhor firewalls too. Among other things, the firewall idea implies that Einstein’s general relativity is completely wrong, at least at the horizon of a black hole. In fact, this is utterly counter-intuitive. For a large black hole, gravity at the horizon is actually very weak because it lies far away from the central point, where all the matter is located. A region near the horizon thus looks pretty much like empty space, and yet the firewall argument says that space must abruptly “end” at the location of the horizon.

There may be multiple layers of descriptions of a black hole, postulates Yasunori Nomura, and the preservation of information and the smoothness of the horizon refer to theories at different layers. At one level, we can describe a black hole as viewed from a distance: the black hole is formed by collapse of matter, which eventually evaporates leaving the quanta of Hawking radiation in space. From this perspective, there is no information loss in the process. That is because, in this picture, an object falling toward the black hole never enters the horizon, not because of a firewall but because of time delay between the clock of the falling object and that of a distant observer. The object seems to be slowly “absorbed” into the horizon, and its information is later sent back to space in the form of subtle correlations between particles of Hawking radiation.

On the other hand, the picture of the black hole interior emerges when looking at the system from the perspective of someone falling into it. Here we must “ignore” the fine details of the system that an infalling observer could not see because he or she has only finite time until they hit the singular point at the center of the black hole. This limits the amount of information they can access, even in principle. The world the infalling observer perceives, therefore, is the “coarse-grained” one. And in this picture, information need not be preserved because we already threw away some information even to arrive at this perspective. This is the way the existence of interior spacetime can be compatible with the preservation of information: they are the properties of the descriptions of nature at different levels.

To understand this concept better, the following analogy might help. Imagine water in a tank and consider a theory describing waves on the surface. At a fundamental level, water consists of a bunch of water molecules, which move, vibrate and collide with each other. With perfect knowledge of their properties, we can describe them deterministically without information loss. This description would be complete, and there would be no need to even introduce the concept of waves. On the other hand, we could focus on the waves by overlooking molecular level details and describing the water as a liquid. The atomic-level information, however, is not preserved in this description. For example, a wave can simply “disappear,” although the truth is that the coherent motion of water molecules that created the wave was transformed into a more random motion of each molecule without anything disappearing.

This framework tells us that the picture of spacetime offered by general relativity is not as fundamental as we might have thought—it is merely a picture that emerges at a higher level in the hierarchical descriptions of nature, at least concerning the interior of a black hole. Similar ideas have been discussed in varying forms, but the new framework allows us to explicitly identify the relevant microscopic degrees of freedom—in other words, nature's fundamental building blocks—participating in the emergence of spacetime, which surprisingly involves elements that we normally think to be located far away from the region of interest. This new way of thinking about the paradox can also be applied to allow us to identify which features of a realistic black hole are or are not captured by such analyses.

Beginning with the era of Descartes and Galileo, revolutions in physics have often been associated with new understandings of the concept of spacetime, and it seems that we are now in the middle of another such revolution. We may soon witness the emergence of a new understanding of nature at a qualitatively different and deeper level.

Adapted from an article by Yasunori Nomura in scienceandnonduality.com