The Reemergence of Shamanism 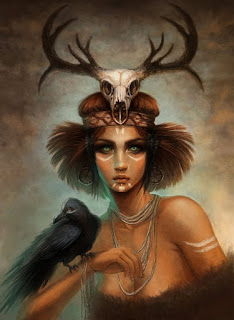 Look until you see
Said the Owl

Listen until you hear
Said the Deer

Touch until you feel
Said the Mole

Shamanism is undergoing a revival today. The emergence of the New Spirituality in the West has focussed educated attention on the healing and nature-working abilities which are inherent in all of us.

Dr Leslie Gray, executive director and founder of the Woodfish Institute, is a Native American shaman and a university lecturer in anthropology and research methodology. Based in San Francisco, she has studied with medicine people and elders from various tribal backgrounds.

She advocates a new vision of health care: the integration of ancient healing and modern medicine. And she consults with individuals and organizations on the practice of ecopsychology.

Leslie Gray is a bridge person. She links two cultures, ancient and modern. And like all shamans, she links two dimensions. She travels in full waking consciousness from the physical world to the spiritual world and back. Her work in shamanic healing requires this.

The shamanic journey involves entering an altered or non-ordinary state of consciousness, usually with the help of sonic driving: a repetitive, monotonous drumming, rattling or changing of body postures. These create what Gray calls "trance-portation."

Most shamans view the universe as composed of these three realms. The upper world tends to be the land of the ancestors, the middle world that of ordinary consciousness, and the lower world the place of power animals.

The shamanic journey begins with the traveler finding an opening to another realm of consciousness. While in some cultures people literally dig a hole in the floor to provide this entrance, in others they regard the opening as a phenomenon within the shaman's consciousness.

The nature of this opening is highly individual. Leslie Gray invites people to think of an opening into the earth from ordinary reality, to enter that opening, go down a tunnel and come out the other side; and from there, to explore the lower world. As people become more proficient at doing this, they begin to encounter allies in that lower world. And they use information gained from communing with these allies to help themselves or others back up here in the physical, middle world.

Traveling to the upper world is similar. The only difference is that you choose an opening that will take you up rather than down, such as a whirlwind, a hollow tree trunk, or a fireplace and chimney. Whatever comes to you as your personal opening is what you use.

One thing which Leslie Gray refuses to do is to tell people what they can expect to find in their travels. "Part of what is empowering to them," she says, "is developing their own maps. For me to develop a map for them would be the very opposite of personal empowerment and would make them dependent on my worldview - not just of this world, but of all the worlds. At the core of the process of acquiring power in shamanism is the ability to find things out for yourself, to know what the upper and lower worlds are like."

Shamans always journey with a mission. The art of shamanism is mastering the ability to bring back important information to heal yourself or others. It is not just journeying to see pretty pictures. A person might do this in the beginning as a way of mastering the technique, but after that, he or she should visit the other worlds with a mission or purpose.

There is nothing to fear on a shamanic journey if it is done properly. A shamanic journey has two advantageous features. First, the beings in the other worlds won't tell the traveler more than she or he can handle at a given time. And second, a guardian spirit generally accompanies the journeyer as a protector. "I think you have more to fear crossing the street in a major city," comments Gray, "than you do going on a shamanic journey with a power animal."

Leslie Gray fosters and promotes what she calls "reciprocal transformation." The idea is to make the inevitable encounter between indigenous systems and technological systems mutually enhancing.

She argues that "conventional analyses have primarily acknowledged the manifest poverty of contemporary indigenous cultures in comparison with the obvious material wealth of industrial-technological societies. In the 21st century, however, the specter of planetary destruction forces us to also see 'wealth' in wisdom about how to live sanely on the earth, in practices of sustainable land use and in evolved knowledge of community-building - all of which exist in the traditions of autochthonous peoples. Correspondingly, mounting evidence of imminent environmental catastrophe forces us to see 'poverty' in the underdeveloped ecopsychology of the technoculture."

Leslie Gray's Woodfish Institute can be found here and she has an introductory article entitled "Reading the Mind of Nature - Ecopsychology and Indigenous Wisdom" here. Other articles on the Woodfish website worth noticing include: Altered States - An Interview on Shamanism,  Using Shamanism for Personal Empowerment, and Shamanic Counseling and Ecopsychology. #
#
From https://alcuinbramerton.blogspot.com/2004/12/resurrection-of-shaman.html, October 5, 2020; the picture at the top of the blog is "Shaman" by Marjorie Davis.