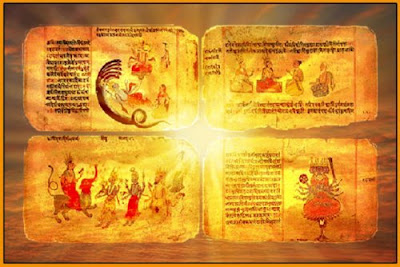 The Vedas are the most ancient scriptures in India, orally transmitted since the second millennium BCE. No one is credited with composing the Vedas. They are considered the eternal wisdom revealed to the sages a long time ago while they were in deep meditation. They are considered to be “primordial rhythms of creation” that have been here from the beginning.

Each of the Vedas has its own mantra which sums up its essential teachings. These great utterances are the fruit of the Vedas, the gifts of the ancient sages, steadfast in knowledge.

the Rig Veda declares “The Absolute is Consciousness”

the Atharva Veda declares “The Self is the Absolute”

the Sama Veda declares “Thou art That”

the Yajur Veda declares “I am the Absolute”

Each of these statements expresses the essential identity of the individual soul with the Absolute. Repetition of the mantras has been called the highest path. In reciting them the cosmos is regenerated “by enlivening and nourishing the forms of creation at their base.”