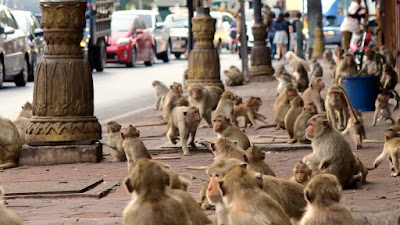 I live in a house off the beaten path with trees all around, birds chirping, and very little traffic passing by. I like the quiet. I like the sounds of nature. But I have friends that like the hustle-bustle of the city with its activity and noise. Is it just a matter of different strokes for different folks, or is there something more behind these disparate proclivites?

I came upon an interesting finding where a team of scientists were attempting to make life more comfortable for monkeys living in a zoo in Finland by letting them control the music they listen to. What they disovered was not at all what they expected.

Given a choice, the white-faced saki monkeys preferred the sounds of automotive traffic over sounds of nature and other soundscapes that are found to be soothing to humans. In the experiment, scientists at Finland’s Aalto University let the monkeys pick what they wanted to listen to from four playlists: traffic noises, nature and falling rain, zen noises, and dance music. Traffic won out, hands own, as the animals calmly slept and groomed themselves while traffic noises played in the background.

“We thought they would enjoy more calming sounds, such as zen music, but actually they triggered the traffic sounds more,” Aalto scientist Ilyena Hirskyj-Douglas said. Zoo research coordinator Kirsi Pynnonen said that screeching tires might be popular among the monkeys because they actually sound most familiar to them. “In the wild, these monkeys use high-pitched hissing, squeaking and croaking to stay in contact,” she said.

This unexpected finding, the researchers say, could help guide future monkey accommodations like letting them choose visuals for TV screens or light settings. With such a broad variety of environmental choices for stimulation available to most humans, perhaps we are all wired to find comfort in varying circumstances. Maybe my friends do sleep better with traffic passing under their windows. Any assumption I may have had to the contrary may have just gone awry. Then again... perhaps there is yet an undiscovered explanation for the monkeys' preference. I still believe that a quiet surrounding is more vitalizing than one with intermittent noise, whatever its source.