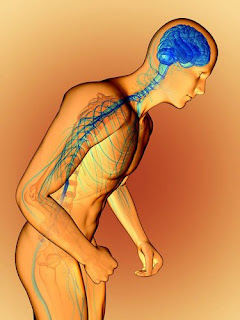 Jeff is a friend of mine who suffers from Parkinson's Disease. It is very sad to see him so disabled after sharing so many great running and backpacking adventures with him. The vitality in his eyes has been replaced by a hopelessness of being imprisoned in a body that no longer allows him to be who he would like to be or to follow his dreams. After spending some time with him, I have to ask myself how I would deal with his circumstances should I ever be diagnosed with the same affliction. In that men over 70 years of age are increasingly susceptible to manifesting the symptoms of Parkinson's, my ponderance at this juncture in life may not be just idle speculation.

I have always looked upon illness, the results of injury, and compromised health circumstances as opportunities. While living quite an active life myself, I have not reached this point unscathed. I have spent time in a wheelchair, been severely injured more than a few times, been told three times that I would never be able to run again, and even died once. No matter what cards life deals me, I look for the lesson so that I can continue to play my hand well. I explore the “whys” and don't always come up with a logical answer. But each crisis situation offers me an opportunity to learn something new and to use the challenge before me as a springboard to growth and renewal, even if it is not in the direction I could have imagined.

The cause of Parkinson's is that the neurons in Jeff's brain have essentially been damaged and overrun by toxic heavy metals. How these heavy metals entered his system, I don't know. He lives in a house that looks like it was built a hundred years ago. I would first suspect there still may be lead paint on his walls and that his indoor plumbing may still in large part be the original lead pipes, exposing him to more lead than his brain can handle. His diet may have played an aggravating role as well, or perhaps it is because of somewhere that he worked years ago.

Mercury deposits, like from eating too much cheap tuna, oxidize quickly and release very toxic oxidative debris that starts to coat brain tissue, smothering neurons. When a neuron is smothered like this, its neurotransmitters become saturated with the oxidative material, and they quickly diminish. So Parkinson's is really the result of heavy metal runoff and the loss of many neurotransmitter chemicals.

What would I do if I learned that I was sick as a result of exposure to toxic metals? First, I'd eliminate the source so as to bring to an end my exposure; then I would seek to remove the toxic heavy metals from my tissues. Chelation therapy is most frequently successfully used by alternative medical professionals, but a daily intake of just three grams of chlorella will accomplish the same cleanout over six to twelve months. I take chlorella daily as a preventative purge of my own system against the unwanted influence of heavy metals that I may have been absorbed one way or another over a lifetime.

Third, I would want to restore the damaged neutrons in my brain that are manifesting the symptoms of the Parkinson's. The brain is a remarkably resilient organ in terms of its ability to heal itself, if conditions are right. Without giving a thought to Parkinson's, I'm already doing exactly what I should do to optimize neural health – I juice one bunch of fresh celery every morning first thing. What happens is that the antioxidants in celery juice help stop the oxidative runoff process. What's so special about celery juice? Celery juice helps restore healthy neurons by infusing them with trace minerals. One of the reasons that I added it to my daily health regimen a long time ago is that it helps the liver formulate and methylate vitamin B12, critical for brain health, and specifically for neuron growth. Long-term consumption of the juice from one bunch of celery every day helps restore diminished neurotransmitter chemicals and refurbish neurons, getting them to regrow.

If Jeff were to suddenly begin doing what I have been doing, he would begin to reverse the symptoms of Parkinson's, but because his case is advanced, it might take some time. Common sense dictates that the longer our bodies have been abused, the longer it will take to restore them to balance. With any degenerative disease such a Parkinson's, it is always a matter of restoring balance. Depending upon the individual and their resolve to heal themselves, recovery is always possible. It is only a matter of degree.