Inflation and the Game of Monopoly 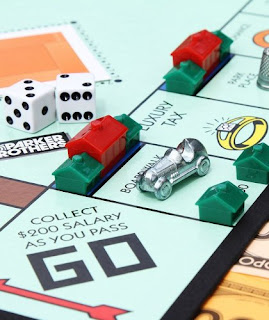 What if our economic reality worked like the game of Monopoly?

In Monopoly, you can spend or lose all of your money and still be able to make the rounds around the board in the hopes that you might build back some net worth and own properties – but the odds are generally against any such miraculous recovery. There are rags to riches stories in real life, but generally they are enabled due to the concepts of credit and leveraging other people's assets.

Monopoly works because there is a zero boundary for every player's net worth – no one can be worth less than zero. But if a player were given endless credit (so that a negative net worth was allowed in the game) the game would suddenly become pointless.

Is there an upper bound at Monopoly? The bank in Monopoly can certainly run out of money. Players don't necessarily have to treat all the paper money in the game as an upper boundary. One could always write the richest player an IOU and take that amount of cash from him to put it back in the bank to continue.

How else could you solve that problem? Confiscate the same amount from every (remaining) player and put it back in the bank instead? That would be pointless if most wealth is with one player and you want the game to continue. Another option is to go Keynesian (in its true practical implementation) and confiscate 10% of each player's net worth to "re-liquidate" the bank - similar to "printing money," just more explicit.

But that's linear (a fixed percentage), so why not go with progressive confiscation rates, and take a higher percentage of the wealthier players' net worth? But wait a second, did I just stumble over the reason why the filthy rich love Keynesian economics? Is it because printing money only "taxes" everybody linearly, which is much better for the rich than progressive taxation, which is the global standard in income tax policies?

Let's explore this profound insight a bit more. Modern Monetary Theory (MMT) holds that central banks/states can print as much money as they want without any adverse effects. From this, it's a small step to sending every household a monthly stipend (Universal Basic Income--UBI) paid by freshly issued currency.

Given the unfairness of the income tax system, as the super-rich buy tax breaks, tax shelters and subsidies via lobbying and political contributions, it's just one more tiny step to eliminating income taxes entirely and printing all the money the state needs.

Why would this enrich the super-rich and impoverish the rest of us? Printing money in excess of the goods and services being generated creates inflation, which is a "tax" on all cash and wages, both of which have been losing ground for decades.

Inflation is best defined as a loss of purchasing power. With 10% inflation, $1 only buys 90 cents of real-world goods and services. Thus it's the exact equivalent of a 10% tax not just on wages but on all cash.

Markets place a premium on any assets that keep pace or outpace inflation, so the value of the assets owned by the super-rich soar, further enriching the few who own these assets.

Asset inflation benefits the super-rich more than anyone else because they own the vast majority of assets. So money-printing and the inflation it generates is a win-win for the rich. The "tax" rate of inflation / money-printing barely touches their incomes or wealth, both of which are tied to assets that rise along with inflation. All that money-printing pushes the value of their assets higher, making them even richer, while the inflation "tax" impoverishes everyone who depends on wages and cash.

No wonder the super-rich love MMT, money-printing and Keynesian giveaways of freshly printed currency - inflation makes them richer while it makes everyone else poorer. Going back to the analogy of a Monopoly game: if inflation takes 10% of every player's cash, does it touch their property holdings? No. So the wealthiest Monopoly players' net worth is barely affected while players with fewer assets will find it difficult to survive as their cash is "taxed" away by inflation.

Asset inflation benefits the super-rich more than anyone else because they own the vast majority of assets. Plain and simple. Methinks that if Monopoly were played in this way, it wouldn't be any fun at all.