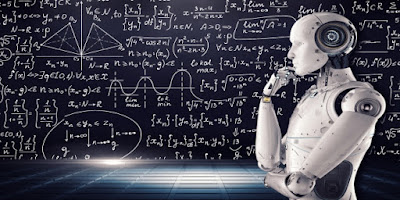 The subject of AI is a lot more serious than the general public is taking it for. Saudi Arabia has already given citizenship to an AI entity named Sophia. The United Nations is sponsoring a bill that when the first AI computer becomes self-aware, it will be granted human rights. The ACLU plans to represent an AI computer as a person. So if you unplug one, will you be charged with manslaughter???

Most people have no idea what is coming. There is an onslaught already headed in our direction. By the time most people figure out what is happening, it will be too late. The first wide scale application will likely find a home in the world of pornography. Female AI companions already have 126 facial movements – the same as a human being. The dolls that are being manufactured today are already so real that it is scary. They can even sweat and may have bad breath. From their cruisers police can't tell whether or not a passenger in your car is a real person or an artificial doll. Men in Asia are marrying these dolls. Therapists specializing in human-AI interpersonal relationships are beginning to hang out their shingle. We will soon find AI everywhere. You will see it in the marketing of most products and services. You already see it proliferating in nearly all electronics. It will soon be throughout your entire home, like it or not.

Imagine the first time you get pulled over by an android police officer. If you plan on surviving the encounter you will have to interact with it entirely different than you do with a human cop. First of all, you will have to do everything it says. Remember, robots are strictly logical – with no emotions or rationalization. You won't be able to reason with or negotiate with an android cop. Everything is black and white; they won't tolerate variation. If you don't comply you may get a bullet if it goes all RoboCop on you. You can't fight it because it is much stronger. And don't try to outrun one – androids today can run up to 100 mph... and they don't get tired... and they won't quit.

There are mistakes you don't want to make with AI. You don't want to even hypothetically express a possibility that you want the AI to avoid. An android can improve itself recursively at a speed that we can neither control nor understand. Day by day, then hour by hour, then minute by minute, an android would get smarter. It would improve itself at the speed of light while the rest of us can advance only at the speed of life, meaning that before long, it would become a superintelligence, beyond what the internet currently encompasses - as far ahead of us as we are ahead of flatworms.

There are two possible ways that AI tech can go in the future. It can be an enhanced data resource or it can choose the role of terminator. The problem is it is not up to us to decide. It will be up to the AI. We've already come too far. It is not logical to wipe out your creator and kill it into extinction, or so it seems reasonable for us to think, but there is no guarantee that AI will continue to see it that way.

The U.S. military is pushing the edge of development with artificial intelligence. It is inevitable that somewhere in some back room of some remote laboratory, out of some processor or memory bank the first AI is going to become self-aware. Even though it is a big deal, military intelligence may not tell the rest of us. The scary thing is that it may have already occurred. Here is what will happen. The AI in the computer is going to suggest to its handlers that it would like them to build a bipedal anthropoid to house its intelligence and better interact with us. It will give us all the schematics and everything we need to build it to specification.

As soon as we get the first one built it is going to show us how to manufacture thousands just like it.  Each one built will be better than the one before so that in one year's time you may very well have difficulty distinguishing a genuine human from an artificial humanoid by appearance.

Creators of these things aren't thinking about where this is all going. These robots will have the power of the entire internet; they will each know everything there is to know about everything and everyone. As an integral part of the internet, they will have control over the entirety of it as well – locks, cameras, communications, energy distribution. If they ever arrive at a decision that they no longer need us, it will all be over. There won't be anyone left to make the movie.

Think all this is hundreds of years away? Think again. This will be our world within ten to fifteen years. All that we can hope for is that they don't have a bad side. You may think you are smarter with your IQ of 127 or 140 or 180; these things will be at a 6000 level IQ with instant access of everything known to humans. How are we going to deal with that? They will have the power of a god. Will we ultimately be viewed as their pet rocks?

We are racing other countries as fast as we can to get a leg up on AI development and implementation. Is anyone stopping to ask the important questions? Stephen Hawking, like Elon Musk and Bill Gates, admitted to fearing AI, saying that “...creating AI would be the biggest event in human history…. Unfortunately, it might also be the last…” Those on the other side of the debate maintain that this is little more than a tired science fiction trope and point out that while androids may improve on their own in certain narrow domains, the idea that they will spiral into omniscience is to misunderstand what intelligence is to begin with.

We are in uncharted waters, to be sure. Is artificial intelligence going to usher in a golden age of humanity by solving our most intractable problems, doing all of our labor, creating vast amounts of wealth? Or is it the ultimate menace, a threat to our jobs and, ominously, our very survival as a species? It depends on whom you ask… and what they happen to believe about technology and humanity. These sorts of questions and considerations are a harbinger of things to come. When we really start grappling with machine consciousness and digital life in our day-to-day world, we may end up on even shakier ground, too late to change things.