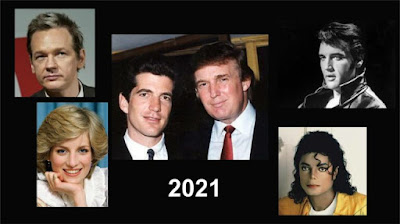 Today is a day that will be sung about in the annals of the history of not only the United States, but of the world. Take a long look around and pay attention today, for you will want to remember it when you retell the story that shall unfold in years to come. Do you remember where you were and what you thought and felt on 9/11? Some of us clearly remember every detail of the day John F. Kennedy was assassinated. Like these tragic moments when the world changed, what begins today will likewise change the world as we have known it forever after. There will be good, there will be bad, and there will be ugliness, but when we are finally able to measure what happened, it will not be with great sadness and regret, but with great relief and appreciation.

The recently published picture above linked to British intelligence poses the President with many famous persons we loved who left us far too early. Julian Assange who is alive and waiting in the wings, sequestered in England, is also featured in the photo. Just what was the purpose for creating it? Perhaps it has something to do with the Ayatollah Khameini publicly proclaiming Trump will be killed. Will the President and Assange be joining these other famous persons? Or will they all be converging at some point of time – say today – to celebrate some great occasion, not to mention their unexpected “rebirth”? Interesting speculation, even for someone over the edge as far as someone like me!!!

Electors from across the nation converge on Washington D.C. today, along with a million or so MAGA Patriots. Methinks the President did not invite a million followers to come to the Capitol to watch him be humiliated. The left should be nervous. Is the Prez about to play the trump card?

Considering a worst case scenario, Pentagon sources say that if Trump is killed or if the Congress and Senate vote to support the fraudulent election of Joe Biden, then “the people will begin killing politicians and judges as well as corporate executives, vaccine pushers, lockdown promoters, etc.” The people will use their Constitutional authority to take back their country. The left should be worried.

The situation inside the military is such that the colonels and non-commissioned officers are ready to take action into their own hands if the generals comply with the obvious election theft. Some NSA sources think we are dealing with a bifurcation of reality. This could be a metaphor for different visions of the world or it could be real.

We live in a special time. The old rules no longer apply. A positive outcome is destined. Only the details of the way we get there remain in question. I fully expect a surprise from the 5D chess magician. He will be restored his seat in the White House for four more years, guaranteeing him that much more time to clean out the swamp creatures that have hobbled our world our entire lives for their own ends. I expect high profile arrests to begin today as the United States Marines and National Guard systematically round up those named in 220,000 sealed indictments, working quickly to process members of the criminal swamp through Gitmo and FEMA camps as accommodations allow before Nuremberg type war crimes tribunals and public executions.

Our Constitutional Republic will be restored, grasped from the clutches of Admiralty Law, and Donald Trump will stamp his place in history as one of its greatest heroes, known forever after as the liberator of humanity. So, remember today. You are living through the second greatest moment in this country's history. Your ancestors will celebrate this day, even if you do not!

(Oh, by the way, Michael Jackson, Elvis, Diana, and JFK, Jr. will all be celebrating at the next Inauguration, along with Julian Assange. No, they did not die. British intelligence won't tell you why they posted this picture. Ask John Galt where JFK, Jr., Elvis, Diana, MJ, John Denver, Prince, and others have been all this time!)