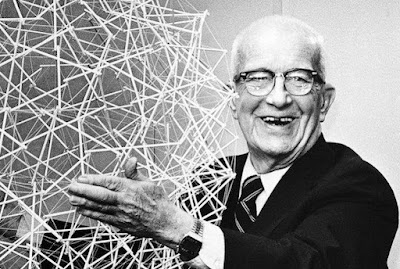 Nearly a century ago, a 32-year-old aspiring businessman stood on the precipice of ending his life. Failing at everything he attempted, he finally declared bankruptcy, and believed his wife and family would be much better off without him. Before throwing himself into Lake Michigan, a wild notion crossed his mind. It seemed like a waste to throw away his life. Since he was going to end it anyway, why not just donate his life to science? Why not give his life to the world and live it as a scientific experiment?

This eleventh hour epiphany gave this young man named Buckminster Fuller another 55 years in which he went on to become a philosopher and noted inventor, inventing the geodesic dome and the concept of Spaceship Earth.

Taking a cue from Bucky, maybe we are given our lives not just to live them, but perhaps to donate them to the world in a grand “experiment of one” to see if we can perhaps advance the world as well as the lives of others around us.
at October 23, 2019