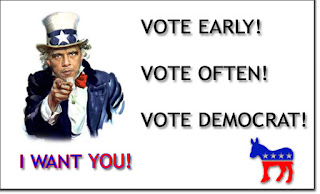 Continuing with yesterday's benign diatribe, I would like to get my head around the general Democrat Party platform for the presidential contest and attempt to understand what it is that the Dems propose to change about current national policy. Just what could we expect to see if a Democratic nominee were to take back the oval office in January 2021?

Without assigning any sort of priority, it seems unquestionable that among the first items on a new Dem president's agenda would be completely gutting the Second Amendment, removing as many guns from the hands of ordinary citizens as possible, and quickly. There seems to be a broad consensus here among all nominees. I guess a majority of Americans would agree to this if they vote for the Dem nominee.

The next thing that will happen, in line with the Democrat platform, is the destruction of free market capitalism, officially moving this country toward socialism. If it works in Cuba and Venezuela, why wouldn't it work here? Again, I guess a majority of Americans would want this if they vote for the Dem nominee.

Next to fall will be private health insurance. The Dems will put the government in charge of everybody's health care. It won’t matter how much it costs. It won't matter how much pain results. If you’re on a private insurance plan that you like, if you’re on an insurance plan at work that you like, they'll be taking that away from you. For the good of the country, of course; for the good of everybody, especially for the good of people that don’t have health care. I guess most folks would think this was a sacrifice worth taking if they vote for the Dem nominee.

The Dems are going to raise every tax they can across the board, and in particular they are going to raise middle class taxes to fund health care for the poor and for illegals. At least that's what they consensually agreed to during the debates, so I guess it must seriously be on their agenda. Again, most who vote for the Dem nominee must be willing to do their part.

And about those illegals receiving the benefits paid for by the middle class tax increases, the Dems all seem to agree they are going to grant amnesty to the many millions of illegal immigrants already here in the country. They will probably grant blanket amnesty by executive order and then speed up the citizenship process so they can register them to vote. Those who came here illegally will be allowed to stay and more will be invited and welcomed across our open borders. Nobody will be punished. If you have come to the United States illegally, you will be given free health care paid for by tax increases on the middle class. Lots more folks to pull the “D” lever. Those who vote for the Dem nominee won't mind footing the bill while the new immigrants get a foothold in America.

The schools won't change much. The Dems plan is to double down on failed public schools and expand their influence. They are not going to engage in any work that would fix public schools because they really don’t see a problem there. Dems by and large are already in charge of them. It's the left that runs America's public schools. They are already accomplishing what they intend. They’re not teaching people to think; they’re indoctrinating, propagandizing, distorting American history. Business as usual and more of the same.

Climate change will likely take front and center in all policy decisions as Dems declare war on fossil fuels. Things will change dramatically in our evolving energy-deprived socialist Democrat-run country. How they are going to pull this off, no one has shared with the public yet. But that's okay, because if you vote for the Dem nominee you already acknowledge that they probably know more than you do about how to implement all of these changes.

Maybe its not fair to bring up the fact that the candidate that is likely going to be the Democrat nominee and possible president has never done anything more than be a politician. Each of the candidates running for president thinks the Trump administration doesn't know what it's doing. While every one of these prospective nominees professes to be an expert in health care, there isn’t one of them, interestingly, that’s ever run a hospital or a free clinic, or anything other than a campaign. Not one of them has ever run a company. Just as none of them are experts in health care or running a business, they are not experts in energy, production or use; nor are they experts in logistics. Remarkably, not one of them is an expert at anything.

This field of Democrat candidates is a classic example of the arrogance of people who are of the academic mind-set. They’ve never done anything in life other than run for office. They sit around talking to each other in the lounge theorizing about what is possible. They think they know more than everybody who’s ever actually done things, and if you vote for them, you probably agree.

So here is what you are voting for if you vote Democrat for the coming presidential election: Most obviously, you will be voting for a zany candidate who thinks socialism is right for America. You'll be voting against rising wages, for continued failed schools, for third-rate rationed health care run by the government, and for some mythical unaffordable “renewable, clean, sustainable energy” that does not yet exist and probably won't work anyway. Vote Dem and the great American experiment will quickly begin to resemble the failed Venezuela experiment. That's the part they leave out during the Dem debates. But we'll have “equality”. Damn sure. We'll each be equally miserable. If this sounds “fair”, then by all means, pull the D lever.
at October 05, 2019