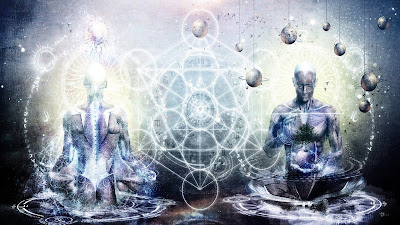 We are living in a transitional time in which people are increasingly discovering that the rationality of traditional scientific materialism is no longer satisfying in its explanations. People are sensing that there has got to be more to it than what science is telling us. And to the same degree, orthodox religion is coming up short on delivering what people are looking for; more and more people are turning to mysticism for an understanding of the way things are.

Humanity is on the verge of monumental discovery, about ourselves and the universe we inhabit. Science has progressed to a point where it acknowledges that the elemental aspects of matter do not behave in a predictable manner. Science has encountered the mystical, the indefinable, as perhaps the final explanation to understanding the world, strangely dovetailing with mysticism.

Science has reached its limit in the study of matter; it has been shifting its focus increasingly to that which heretofore has been unseen... energy or 'spirit' - the realm of the mystic. Renowned physicist Max Planck opened the speculative door to God, the nature of God, the possibility that the universe is a unified field, a cohesive fabric, with omnipresent conscious awareness, a conscious energy, as he pondered the origin of energy. "All matter originates and exists only by virtue of a force... We must assume behind this force the existence of a conscious and intelligent Mind. This Mind is the matrix of all matter," said Planck.

What is this matrix of all matter, the quantum field behind all that exists? Is it best to grapple with an understanding of it from a scientific perspective or a mystical one? Are science and mysticism aiming to understand the same thing?

In this brief expose I look at how the mystical discipline of Kabbalah is essentially describing the same thing modern physicists are describing when the world is viewed through a quantum lens. And looking at the perspective of the Toltec tradition of ancient Mexico, each view mirrors the Yaqui sorcerer Don Juan's breakdown of reality into the first and second attentions.

There are two Hebrew words in kabbalistic language that correspond to both quantum and Toltec conclusions. The first is “yaish.” It is an all-encompassing concept, referring to virtually everything in creation - anything that has a beginning or an end, that has spatial coordinates, that has a definition, that is bordered by other things. And it’s not just material reality. Love has a beginning, it has an end. Anybody who has tried to live in the world knows that we live in the world of yaish. Each of us is yaish.

Everything is yaish. But yaish is not everything.

There is only one thing that is not yaish. That thing has no beginning, it has no end; it’s not bordered by anything, it has no definition, it has no spatial coordinates. It is the opposite of yaish, described in Kabbalah as “Ein Sof”, meaning without end. Literally it means nothing. Ein sof has something to do with God, the source of everything of yaish. Everything in the world is made of Ein Sof. Everything in the world is the wave of which Ein Sof is the ocean. And our knowledge of the ocean is largely based on the way it manifests itself in the waves, that is, the yaish.

96% of the energy in the universe is unseen with no spatial coordinates – this is Source Energy or Ein Sof. Yaish is all form, the 4% of the universe we can see and measure. The quantum terminology corresponding to yaish is the field, with the intention behind the field corresponding to Ein sof.  In the Toltec tradition of don Juan Matus, the world we know day-to-day is referred to as the first attention, with the underlying matrix of reality known as the second attention.  Quantum physics, Kabbalah, and ancient sorcery each draws the same conclusions about the world.  Physicists and mystics and sorcerers are all on the same page in their interpretation of reality.  Approaching from entirely different directions, these disparate endeavors of discovery have reached the same core beliefs by following uniquely different paths of inquiry.  Every path on the mountain, it would seem, though perhaps out of sight from all others, leads, nonetheless, to the same summit; each tradition has a unique story to tell about how one goes about reaching the top, but all stories end the same way.

There is a great lesson here.  All of us humans, despite our unique differences, all ask the same questions about who we are and our place in the larger scheme of things. In the end, we are the same.  We are One.  If I have a prayer to offer in this regard, it would be this:

As we exist on the Earth along this timeline, and as we each gather and connect, let us become community. Let us open ourselves to Source Energy, the great ocean of Ein Sof, the intention behind the field, the second attention, and learn from each others’ hearts more about that Source. As the waves, let us look within our being and to each other to become closer to understanding the Source, the matrix from which all things spring. Let us once again claim a path along the way that leads us to become proactive co-creators of wholeness in the wonderful world we live in.
at October 27, 2019