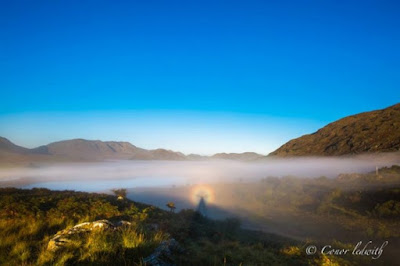 If you were mountain climbing at a time of day when the sun was low and behind you, and if you climbed high enough to look down into an evening mist settling in below you, you might witness the shadowy figure of what is referred to as a Mountain Spectre or Brocken Spectre, like these three photos from Ireland.

I have yet to witness this remarkable phenomenon, due mostly to my habit of being sure that after I summit a peak I am headed back down by noon to avoid electrical storms. Some day I will have to climb late in the afternoon, planning to spend the night on the summit, and hope I am fortunate enough to experience a Mountain Spectre.

Essentially, a Mountain Spectre is your own shadow that you see, cast on the surface of the mists below, surrounded by a wonderful, yet mysterious halo-like rainbow-colored ring of light. The sun must be behind you. You’re seeing your shadow projected in front of you, through the mist.

The Brocken Spectre is a type of what is called a Glory. Glories are often seen by air travelers, who see the shadow of their airplane cast on clouds below. The airplane’s shadow will be moving along on the cloud tops, as the plane speeds through the air. It’ll be surrounded by a rainbow-like halo of light. It is the same thing with a mountain glory, or Brocken Spectre. You’ll be standing with the sun at your back, gazing at your own haloed shadow cast on fog.

The spectacle takes its name from the Brocken, a peak in the Harz Mountains in Germany. This region is known for frequent fogs. Johann Silberschlag, a German Lutheran theologian and natural scientist, is said to have first described the Brocken Spectre in 1780. It has since figured in stories about the region and elsewhere.

At times, your shadow in a Brocken Spectre will appear enormous, but this is an optical illusion. At his great website Atmospheric Optics, Les Cowley explains why the shadow of the Brocken Spectre can appear so huge: “The spectre sometimes appears to be huge. This is probably caused by the presence of the glory and the mist obscuring more familiar reference points with which to judge its size. 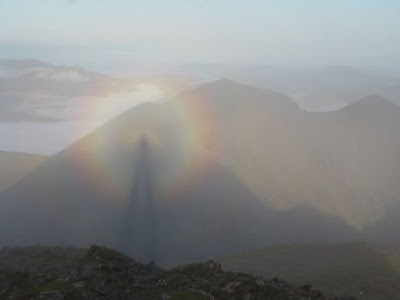 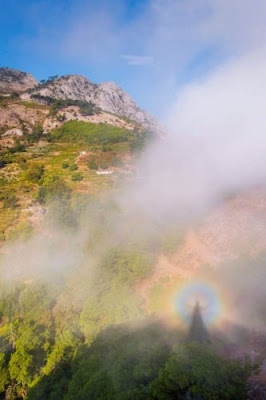 Quiet Friend Who Has Come So Far

Quiet friend who has come so far, feel how your breathing makes more space around you. Let this darkness be a bell tower and you the be... 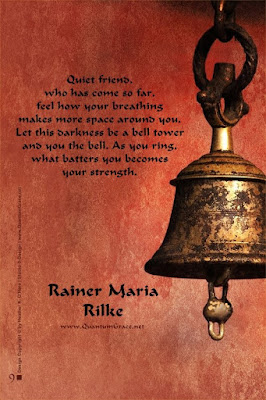